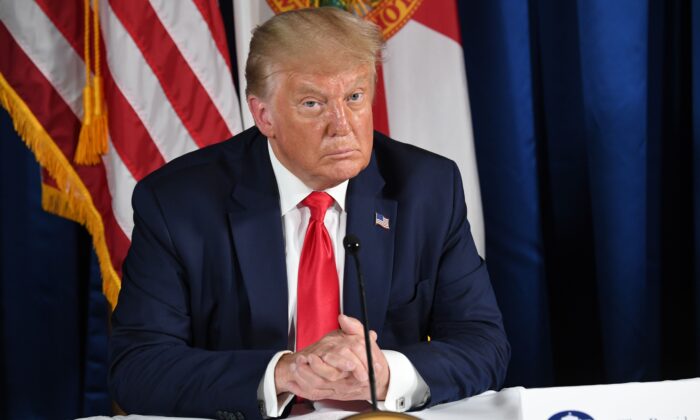 As members of Congress debate over the details of the next stimulus package, President Donald Trump on Monday evening said he is considering issuing executive orders to suspend eviction and payroll tax.

Republicans and Democrats are divided primarily over whether to extend the $600-per-week unemployment benefits provision that expired late last month. Republicans last week proposed a $200-per-week bonus before implementing a program that would pay 70 percent of a workers’ wage.

“I could do that if I want, and I want to do that. I don’t want people to be evicted,” Trump told reporters about whether he would suspend evictions. A federal moratorium on evictions, which was passed in March’s CARES Act, expired last month.

The CARES Act and other stimulus measures were passed in order to offset economic losses incurred by the CCP (Chinese Communist Party) virus pandemic.

Trump, in the news conference, said he has the authority to suspend payroll taxes.

“I can do that also through executive order, so we’ll be talking about that,” Trump said.

Pelosi told CBS News, after the meeting, that it was “productive,” telling reporters afterward that “we’re moving down the track,” without elaborating.

“We’re making some progress on certain issues, moving closer together,” Schumer also told reporters while adding that “there are a lot of issues that are still outstanding.”

Democrats and Republicans are also at odds with providing more funding to cities and states amid the economic downturn. In the HEROES Act passed by House Democrats in May, they sought to provide $1 trillion in funding, while the HEALS Act provides none.

They also have differing opinions on whether there should be liability protection for businesses, hospitals, and schools. Republicans support the measure and Democrats do not.

The White House has pushed for a temporary measure to extend the unemployment benefits for another week as negotiations continue, although Pelosi and other Democrats said they don’t want to pass a deal in a piecemeal manner.