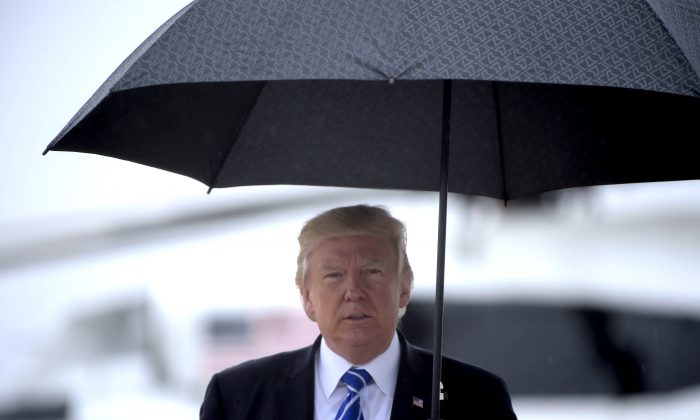 President Donald Trump walks in the rain as he departs for North Dakota from Andrews Air Force Base, Maryland, on Sept. 6, 2017. (BRENDAN SMIALOWSKI/AFP/Getty Images)
US

President Donald Trump said following a phone call with Chinese leader Xi Jinping on Sept. 6 that they both agree on the importance of the denuclearization of North Korea.

“We will not be putting up with what’s happening in North Korea,” President Trump said outside the White House before boarding Marine One.

“I believe that President Xi agrees with me 100 percent. He doesn’t want to see what’s happening there, either. We had a very, very frank and very strong phone call,” said Trump.

Following a string of provocations by North Korea, most recently an underground nuclear test on Sunday, Defense Secretary James Mattis said the president had been briefed on military options against the communist nation.

Mattis said that while the United States does not seek war it has options for the “total annihilation” of the country.

President Trump has expressed hope on several occasions that the Chinese regime under Xi’s leadership would be able to help contain the North Korea threat.

In January, he tweeted that: “China has been taking out massive amounts of money & wealth from the U.S. in totally one-sided trade, but won’t help with North Korea. Nice!”

Following Xi’s to the United States in April, Trump expressed confidence that the Chinese leader would help the U.S. in containing North Korea. Notably, North Korea relies on China for much of its trade.

“I have great confidence that China will properly deal with North Korea,” Trump tweeted on April 13, just days after the summit with Xi.

In late May, Trump said “China is trying hard!,” when it comes to North Korea, but said on June 20 that: ” While I greatly appreciate the efforts of President Xi & China to help with North Korea, it has not worked out. At least I know China tried!”

The father of current North Korean dictator Kim Jong Un, Kim Jong-il, met Jiang in Beijing in 2004, and the two communist leaders were photographed in a fraternal embrace.

Despite Jiang officially being out of power, he still has influence over parts of China’s communist regime. When it comes to North Korea Xi Jinping does not seem to be in full control.

The three Jiang faction members in the current Politburo Standing Committee—Zhang Dejiang, Zhang Gaoli, and Liu Yunshan—have made high-profile diplomatic trips to North Korea and two of the three even attended college there.

In contrast to the Jiang faction, Xi has not received or visited the current North Korean leader Kim Jong Un, but met several times with Park Geun-hye, the recently ousted South Korean president.

Trump said following the 45-minute phone call with Xi on Tuesday that they would be talking again soon.