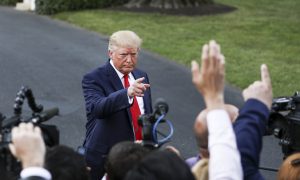 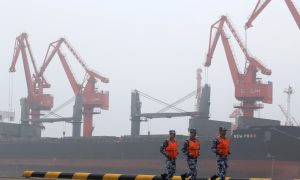 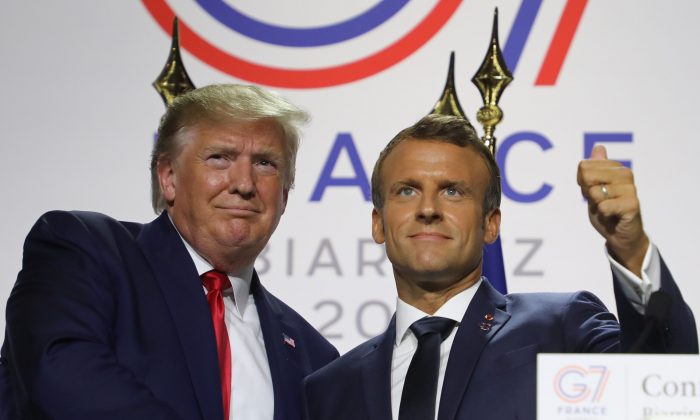 After a weekend of escalated trade tensions, President Donald Trump said he’s hopeful a trade deal would be negotiated with China, noting on Aug. 26 that China wants “to make a deal very badly.”

“I think they want to make a deal very badly, I think that was elevated last night,” Trump told reporters at a press conference at the G-7 Summit in France, referring to public statements made the night before by Chinese Vice Premier Liu He, who said he wanted a “calm resolution.”

“[Liu] said he wants to see a deal made. He wanted it to be made under calm conditions, using the word ‘calm,’” Trump said, expressing agreement with the choice of words.

After both sides announced tit-for-tat tariff increases on Aug. 23, China’s yuan slumped to a new 11-year low against the dollar on Aug. 26, to 7.15 per dollar. It was the second-largest one-day drop of the month.

Great respect for the fact that President Xi & his Representatives want “calm resolution.” So impressed that they are willing to come out & state the facts so accurately. This is why he is a great leader & representing a great country. Talks are continuing!https://t.co/0sotrd1Mzh

Liu, who is Beijing’s top economic advisor, said in an Aug. 25 statement that China wishes to “resolve the issue through consultations and cooperation in a calm attitude” and “resolutely [opposes] the escalation of the trade war.

“[It] is not beneficial for China, the United States, nor to the interests of the people of the world,” Liu said.

Trump, meanwhile, said that it would be to China’s benefit to reach a deal quickly, as it is suffering from an economic downturn.

“Their [supply] chain is breaking up like nobody has seen before,” he said, referring to manufacturers moving their production out of China to avoid U.S. tariffs.

“The longer they [China] wait, the harder it is to put it [China’s economy] back,” Trump said. “I’m not sure they have a choice, and I don’t say that as a threat.”

At a press conference on Aug. 25, Trump also said that Beijing had called trade representatives in Washington twice over the weekend regarding the trade deal. He relayed that they said they will “be getting back to the table” shortly.

“I think we’re going to have a deal because now we’re dealing on proper terms,” he said, adding that it’s the first time that he’s seen that they “really do want to make a deal.”

Geng Shuang, China’s foreign ministry spokesperson, sparked some confusion when he denied during an Aug. 25 press briefing any knowledge of calls made to Washington. He instead criticized the United States for escalating tensions with its decision to raise tariff rates on Chinese goods. The rate increase, announced Aug. 23 on $550 billion worth of Chinese goods, followed China’s retaliatory tariff increases on U.S. imports made earlier that day.

China’s state-run media, meanwhile, was critical of the United States.

The English-language China Daily ran an editorial on Aug. 25 stating that “Washington will never be allowed to control China’s fate.” It added that “Beijing will not cave in to [U.S.] demands” no matter how much the United States applied pressure.

“China has never been a yes-man to any country, and it is not going to be one now,” it stated.

On the same day, the Chinese tabloid Global Times, which is run by the Chinese Communist Party’s mouthpiece People’s Daily, published an editorial stating that China has stood “unfazed” by what it called “U.S. hysteria.” It added that Beijing has made “full psychological preparations” to cope with a further worsening of trade tensions.

On Aug. 26, Trump and U.S. Treasury Secretary Steven Mnuchin both stood by their earlier statements about calls between China and the United States, but declined to offer details.

“Why wouldn’t they? They want to get something done,” he said, noting that he expects U.S. companies to stay in China and “do a great job” if a trade deal can be reached.