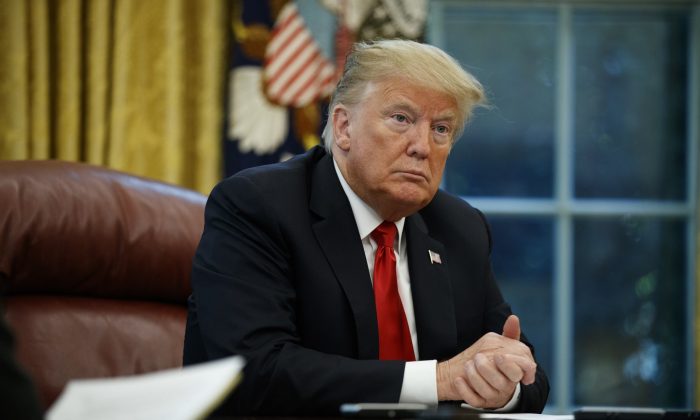 President Donald Trump listens to a question during an interview with The Associated Press in the Oval Office of the White House, on Oct. 16, 2018. (Evan Vucci/AP Photo)
Politics

President Donald Trump said that the FBI and other agencies spying on his 2016 presidential campaign was treason and said the people behind the attempt to frame him and the campaign warranted “long jail sentences.”

“My Campaign for President was conclusively spied on. Nothing like this has ever happened in American Politics,” Trump wrote on Twitter on May 17.

“A really bad situation. TREASON means long jail sentences, and this was TREASON!” he added.

My Campaign for President was conclusively spied on. Nothing like this has ever happened in American Politics. A really bad situation. TREASON means long jail sentences, and this was TREASON!

Trump also highlighted a poll by Fox News that found 58 percent of respondents believe the FBI broke the law in investigating the president.

At least two spies were used to gather information about Trump’s campaign.

Stefan Halper, a retired professor who has links to the CIA and MI6, met with Carter Page, a volunteer adviser to Trump’s presidential campaign in mid-2016, staying in touch for months afterward trying to glean information. Halper was paid more than $1 million by a secretive Defense Department think tank.

A second spy, Azra Turk (not her real name), was named by Trump campaign adviser George Papadopoulos, who has said she tried to entrap him.

Turk pretended to be an aide to Halper and met with Papadopoulos after Halper lured him to London by offering Papadopoulos $3,000 to write a research paper.

Attorney General William Barr said in April that Trump’s campaign was spied on and that he was reviewing the origin of the intelligence activities directed at the campaign, as well as the conduct of the agencies involved.

“A lot of this has already been investigated, a substantial portion of it has been investigated and is being investigated by the Office of the Inspector General at the department,” he said. “But one of the things I want to do is pull together all the information from the various investigations that have gone on, including on the [Capitol] Hill and in the [Justice] Department, and see if there are any remaining questions to be addressed.”

On May 14 it was reported that Barr has assigned U.S. Attorney John H. Durham in Connecticut to investigate whether spying on Trump’s presidential campaign was adequately predicated.

Durham may be one of the most uniquely qualified prosecutors for the job. In 2000, he exposed a group of FBI officials who used murderers as informants. The agents covered up a murder committed by a pair of mobster informants by framing four innocent men. The conspiracy to cover up for the murder involved the agents, their supervisors, and the FBI director himself, according to a ruling (pdf) by a judge who awarded the framed men and their estates more than $100 million in 2006. The bureau didn’t appeal the ruling.

Durham’s findings led to a congressional investigation of the FBI’s use of confidential human sources. In 2003, Congress released a scorching 3,500-page report titled “The FBI’s Use of Murderers as Informants.” The report concluded that the FBI’s conduct in the case amounted to “one of the greatest failures in the history of federal law enforcement.”

In the wake of the murderer-informant lawsuits and investigation, the FBI overhauled its Confidential Human Source Program. Durham will now be probing the same program that was reformed as a result of his prior work.

The investigation, along with other probes being conducted by the Department of Justice, will be examining some or all of at least 10 questions that have arisen about the origins of the spying, known as “Spygate.”