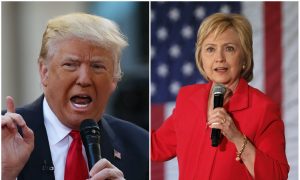 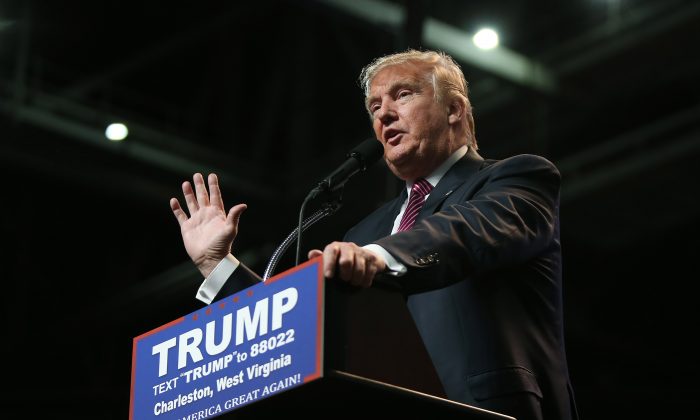 Republican Presidential candidate Donald Trump speaks during his rally at the Charleston Civic Center on May 5, 2016. (Photo by Mark Lyons/Getty Images)
2016 race

Donald Trump, in his latest round of tweets, defended complaints by the Bernie Sanders campaign that the Democratic Party has the nomination process “rigged in favor of Hillary.”  Trump suggested Sanders run as an Independent candidate.

However, that doesn’t mean Trump’s considering him as a running mate.

“Oh, wow. That’s a great question,” Trump said on MSNBC’s “Morning Joe” when panelist Nicole Wallace broached the possibility, based on both candidate’s positions on trade and their large crowds at rallies.

Trump rebuked the suggestion, however, saying he has “much bigger crowds than him,” and on trade, “the difference between Bernie and myself is that I know how to make those trade deals fantastic and he doesn’t. He has no clue.”

“But as your number two, he could watch and learn from you,” Wallace responded.

Trump dismissed the idea. “He has too many other things in the bag,” he said, reiterating that Sanders “should run as an independent” and that “big percentages of the Bernie people are going to vote for Trump.”

Moments later on “Fox and Friends,” Trump confirmed that former Speaker of the House Newt Gingrich was on the shortlist of VP considerations.

Hillary Clinton didn’t rule out the possibility of making Sanders her vice presidential running mate in an interview with CNN’s Chris Cuomo, saying, “That’s something down the road.”

She said putting Sanders on her ticket wouldn’t be the primary way to unite the Democratic party after a hard fought primary season—instead, the unifying force would be Trump.