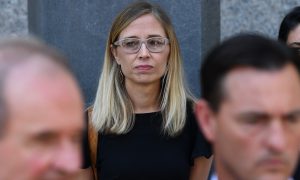 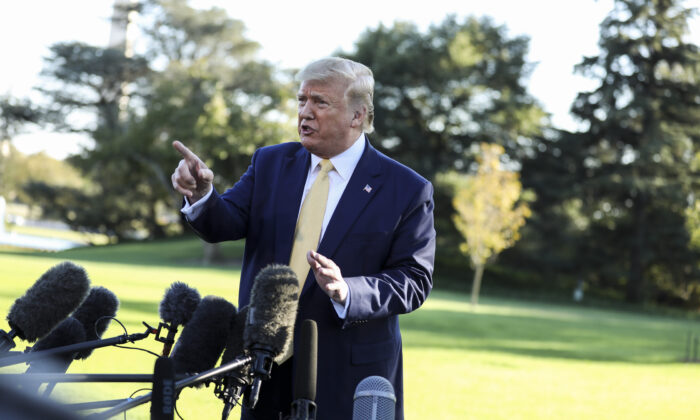 President Donald Trump called ABC “very deceptive” in response to a reporter’s question on Wednesday, noting the network took down a video it claimed was from the Syrian border but was actually from a Kentucky gun range.

ABC reporter Jon Karl asked Trump at a press conference at the White House: “You don’t have any regret for giving [Turkish President] Erdogan the green light to invade?”

“When you ask a question like that, that’s very deceptive, Jon. It’s almost as deceptive as you showing all of the bombings taking place in Syria and it turned out that the bombing that you showed on television took place in Kentucky. I’m not even sure that ABC apologized for that, but certainly it was a terrible thing.”

“It was in Kentucky, it wasn’t in Syria. But I think ABC owes an apology,” Trump added.

Karl did not respond to Trump about his network’s error. Karl has not shared information about the error on his Twitter feed.

A big scandal at @ABC News. They got caught using really gruesome FAKE footage of the Turks bombing in Syria. A real disgrace. Tomorrow they will ask softball questions to Sleepy Joe Biden’s son, Hunter, like why did Ukraine & China pay you millions when you knew nothing? Payoff?

Trump previously criticized the network on Monday, saying on Twitter: “A big scandal at @ABC News. They got caught using really gruesome FAKE footage of the Turks bombing in Syria. A real disgrace.”

ABC issued a correction and took down the video on Monday after falsely claiming it was footage of the armed conflict in Syria. It did not apologize.

“We’ve taken down the video that aired on ‘World News Tonight’ Sunday and ‘Good Morning America’ this morning that appeared to be from the Syrian border, immediately after questions were raised about its accuracy. ABC News regrets the error,” ABC News said in a statement.

“This video right here appearing to show Turkey’s military bombing Kurd civilians in a Syrian border town,” Llamas told viewers. “The Kurds, who fought alongside the U.S. against ISIS. Now, horrific reports of atrocities committed by Turkish-backed fighters on those very allies.”

Llamas attempted to blame Trump for what he said was happening in the video.

The video was actually recorded at a 2017 shooting event at Knob Creek Gun Range in Kentucky.

It was shown again on “Good Morning America” on Monday.

“This video obtained by ABC News appears to show the fury of the Turkish attack on the border town,” correspondent Ian Pannell said in reference to the gun range footage.

ABC never told viewers on air about the error.