Trump Reveals His Biggest Fear, Warns ‘We’re at the Most Dangerous Time … Maybe Ever’ 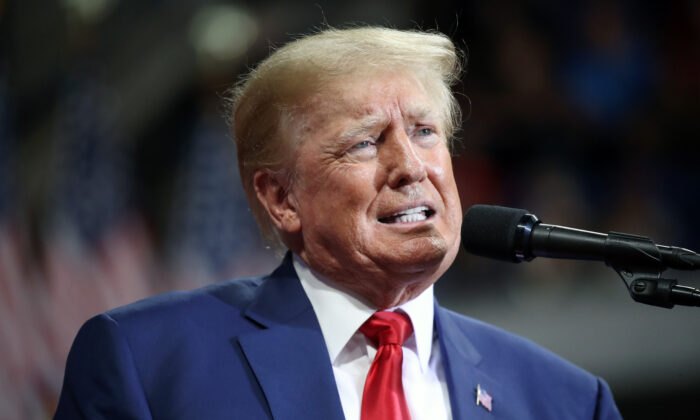 Former President Donald Trump speaks to supporters at a rally to support local candidates at the Mohegan Sun Arena in Wilkes-Barre, Pa., on Sept. 3, 2022. (Spencer Platt/Getty Images)
By Tom Ozimek

Former President Donald Trump said his biggest worry now is where geopolitical tensions over Ukraine and Taiwan may be headed, saying that he thinks “we could end up in World War III” and that the conflict could go nuclear.

Trump, in a Sept. 27 appearance on the “Cats at Night Show,” was asked about his chief concerns and what keeps him “up at night.”

“More than anything else, I think we could end up in World War III,” the former president replied.

He said World War III could be sparked by “all of the horrible things that took place in Ukraine,” adding that it “looks like it’s going to happen in China with Taiwan … you see what’s going on over there.”

China’s communist regime recently ramped up its military threat against the self-ruled island of Taiwan, which Beijing views as its own territory to be taken by force, if necessary.

“China has acted increasingly aggressively when it comes to Taiwan,” U.S. Secretary of State Antony Blinken said in a recent interview, according to CBS News. “That poses a threat to peace and stability in the entire region.”

Even though the United States ended formal diplomatic ties with Taiwan in 1979 and switched recognition to Beijing under the “One China” policy, Washington maintains a robust unofficial relationship with Taipei and is legally bound to provide it with the arms necessary to defend itself.

Tensions in Ukraine, on the other hand, have taken a turn for the worse as Ukrainian forces launched a major counteroffensive, prompting Russian President Vladimir Putin to mobilize more troops and suggest in a speech on Sept. 21 that Moscow was prepared to use nuclear weapons in the conflict.

In his interview, Trump commented on Putin’s remarks and the nuclear threat.

“I think we’re at the most dangerous time maybe in many, many years—maybe ever—because of the power of nuclear,” Trump said.

Trump once again expressed the view that if he were still in the White House, Putin would not have ordered his troops into Ukraine.