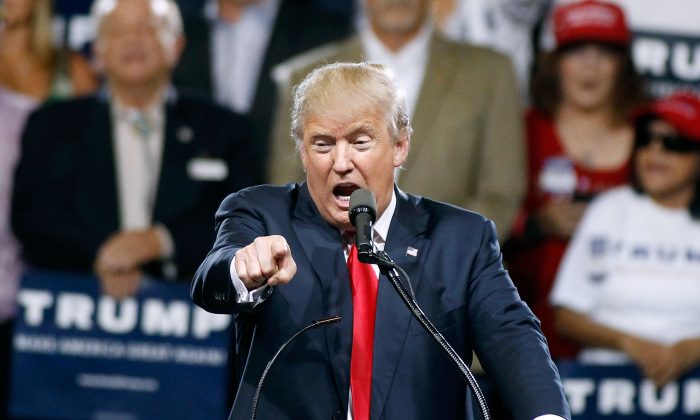 Republican presidential candidate Donald Trump speaks to a crowd of supporters during a campaign rally on June 18, 2016 in Phoenix, Arizona.Trump returned to Arizona for the fourth time since starting his presidential campaign a year ago. (Photo by Ralph Freso/Getty Images)
2016 race

Donald Trump’s campaign was quick to respond after FBI director James Comey recommended no criminal charges against presidential candidate Hillary Clinton for her use of a private email server while she served as President Obama’s Secretary of State.

Comey had announced that while Clinton and her staffers were “extremely careless” in the handling of classified information, the FBI did not find “clear evidence” that she intended to break the law.

Clinton was questioned on Saturday by the FBI for three and a half hours to help complete the investigation. The email scandal has dogged the Clinton campaign as an issue questioning her trustworthiness.

As presumptive Democratic candidate, Hillary Clinton, and President Obama were about to take stage in North Carolina for their first joint rally, Trump responded to the FBI announcement in a tweet.

The tweet coincided with a full statement by the campaign alleging that the former Secretary of State had opened herself to blackmail by using a private email server, which likely had been compromised, and that she had used her position of power as a means to personal gain.

“She used the State Department for her personal gain, trading favors for cash, and tried to conceal the records,” the Trump campaign said in a statement.

The statement also cast doubt on the timing of Clinton’s Saturday meeting with the FBI on a holiday weekend, and on the timing of the FBI’s recommendation the same day as her first rally with President Obama.