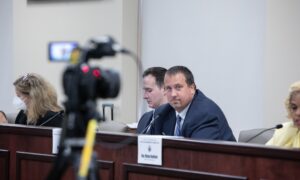 Former President Donald Trump on Monday released a letter he received from a former federal prosecutor in Pennsylvania last month outlining how the attorney was allegedly pressured by former Attorney General William Barr against investigating claims of voter fraud and election irregularities in the state.

William M. McSwain, who served as the chief federal law enforcement officer in the Eastern District of Pennsylvania from April 2018 to January 2021, addressed a letter (pdf) to Trump on June 9 outlining his allegations.

The former president said in a statement releasing the letter: “U.S. Attorney from the Eastern District of Pennsylvania was precluded from investigating election fraud allegations. Outrageous!”

McSwain expressed in his letter to Trump his discontent with the instructions he said he received from Barr following the November 2020 presidential election.

“President Trump, you were right to be upset about the way the Democrats ran the 2020 election in Pennsylvania,” McSwain wrote.

“On Election Day and afterwards, our Office received various allegations of voter fraud and election irregularities,” he wrote. “As part of my responsibilities as U.S. Attorney, I wanted to be transparent with the public and, of course, investigate fully any allegations.”

Days before the presidential election last year, Pennsylvania Attorney General Josh Shapiro wrote on Twitter that “Trump is going to lose” if “all the votes are added up” in Pennsylvania.

McSwain said that while he “disagreed with that decision,” he did as instructed as “those were my orders.”

“As a Marine infantry officer, I was trained to follow the chain of command and to respect the orders of my superiors, even when I disagree with them,” he wrote.

Barr in December 2020 told The Associated Press that the U.S. Justice Department had uncovered no evidence of voter fraud “on a scale that could have effected a different outcome in the election.”

A month earlier, Barr had issued a directive to U.S. attorneys nationwide authorizing them to probe any “substantial allegations” of voting irregularities before the certification of the presidential election.

The Department of Justice didn’t immediately respond to a request for comment from The Epoch Times.

Trump last month said during an appearance on Just the News’ “Water Cooler” that he never admitted defeat in last year’s presidential election and that he has “not conceded.”