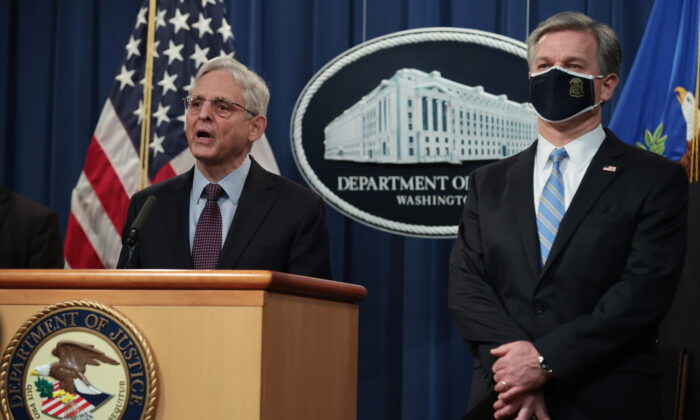 Rep. Jim Jordan (R-Ohio) said the FBI search of former President Donald Trump’s Mar-a-Lago home was “unbelievable” and “unprecedented,” while demanding that Attorney General Merrick Garland and FBI Director Christopher Wray face Congress so they can be grilled about the raid.

“This makes absolutely no sense,” Jordan said of the raid in Friday remarks to Fox News, while calling on Garland and Wray to testify before the House Judiciary Committee, on which Jordan serves as ranking member.

“Why not come talk to us and answer the questions that the American people have about this unprecedented event that took place on Monday night?” the Republican lawmaker said.

Jordan made a similar demand during an earlier appearance on Fox News’ The Ingraham Angle, where he called on the pair to testify before the Judiciary Committee “so we can ask them the questions that the American people deserve answers to.”

“This is unbelievable,” Jordan said. “We deserve answers now.”

With his demand for Garland’s and Wray’s testimony, Jordan joins other Republicans who have expressed outrage at what they say is score-settling by Trump’s political foes.

The Justice Department and FBI have remained mostly quiet about the aim and probable cause behind the Mar-a-Lago raid and have declined to publicly comment to The Epoch Times and other news outlets.

Garland did tell reporters on Aug. 11, however, that he “personally approved the decision to seek a search warrant in this matter” and that the Justice Department “does not take such a decision lightly.”

Wray said a day earlier that he wouldn’t discuss any details of the FBI search of Trump’s property, saying it’s “not something I can talk about, and I’d refer you to the department.”

It was Trump who on Aug. 8 revealed the FBI had executed a search warrant at his Palm Beach home, with the former president portraying the raid as an act of political retribution.

“Such an assault could only take place in broken, Third-World Countries. Sadly, America has now become one of those Countries, corrupt at a level not seen before,” Trump wrote on his Truth Social platform.

In a later statement, Trump called the search a “surprise attack, POLITICS, and all the while our Country is going to HELL!”

The raid appears to have been part of a probe into whether Trump unlawfully removed White House records as he left office, some of which investigators suspect were classified, according to the FBI search warrant made public on Aug. 12.

The warrant was issued in relation to a possible violation of federal laws, including the Espionage Act, with the warrant authorizing the seizure of documents and records at Mar-a-Lago that may have been “illegally possessed in violation of 18 U.S.C. § § 793, 2071, and 1519.”

One of the statutes, 18 U.S.C. § 793, is part of the Espionage Act of 1917, which prohibits a series of actions regarding sensitive government records, including gathering, transmitting, or losing information related to national defense.

Finally, 18 U.S.C. § 1519 prohibits altering or destroying records with the intent to obstruct or influence federal investigations.

The most serious of these carries a maximum penalty of 20 years in prison, though the listing of the statutes in the warrant is not equivalent to a formal charge.

Trump has not been accused of any crimes in connection with the raid.

Lawyers representing Trump have argued that he used his presidential authority to declassify the materials before he left office in 2021.

“The Biden administration is in obvious damage control after their botched raid where they seized the President’s picture books, a ‘hand-written note,’ and declassified documents,” Trump spokesman Taylor Budowich told Fox News on Friday.

“This raid of President Trump’s home was not just unprecedented, but unnecessary—and they are leaking lies and innuendos to try to explain away the weaponization of government against their dominant political opponent. This is outrageous,” Budowich added.

Trump on Friday said the documents the FBI seized were “all declassified” and denounced as a “hoax” anonymously sourced reporting from The Washington Post claiming some of the documents related to nuclear weapons.