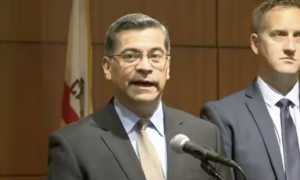 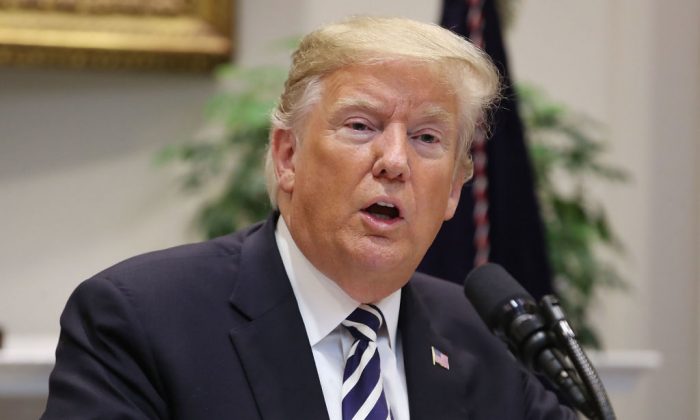 In one of President Donald Trump’s final actions of 2018, he proclaimed January as “National Slavery and Human Trafficking Prevention Month.”

In a lengthy proclamation issued on Dec. 31, Trump said that it’s not enough to merely denounce such horrific assaults, instead, we must “actively work to prevent and end this barbaric exploitation of innocent victims.”

“Human trafficking is a modern form of slavery,” the proclamation stated. “We are morally obligated to confront and defeat the abhorrent practice of human trafficking, and I am keeping my pledge to take aggressive action.”

Such crimes are often described as an everyday problem hidden in plain sight. Data from a landmark Global Slavery Index report in July last year found that 1 in 800 people in the United States lives in modern slavery. The phrase is a broad term used to describe victims of forced labor, sexual exploitation or servitude, and forced marriages, among other abuses.

Trump has made combating human trafficking a focal point of his administration over the past two years. In February 2018, he signed an executive order to dismantle transnational criminal organizations that traffic and exploit people. In January 2018, Trump signed a similar declaration for the month.

In the Dec. 31 proclamation, he linked stopping human trafficking to building a border wall: “I have made it a top priority to fully secure our Nation’s Southwest border, including through the continued construction of a physical wall, so that we can stop human trafficking and stem the flow of deadly drugs and criminals into our country.”

In April 2018, Trump signed into law a bill dubbed the “Allow States and Victims to Fight Online Sex Trafficking Act of 2017.” The act makes it easier to take legal action against individuals who use websites to facilitate sex trafficking, while also aiding victims to fight back against websites that profit from their exploitation.

In the same month, the FBI seized Backpage.com, the largest child-sex trafficking website in the United States. Nearly three-quarters of the cases submitted to the National Center for Missing and Exploited Children relate to ads posted on Backpage.com.

Reports of suspected child-sex trafficking increased 846 percent between 2010 and 2015, largely due to the use of the internet, according to The National Center for Missing and Exploited Children. The bill signed in April has already led to the shutdown of 87 percent of sites used in online human trafficking.

Numerous federal departments and agencies, at the president’s direction, have sought to fulfill the laws governing human trafficking to the fullest extent, resulting in many criminal arrests.

In 2017, the Department of Justice secured convictions against over 500 defendants in human trafficking cases. At the same time, the FBI dismantled more than 42 criminal enterprises engaged in child sex trafficking in the same year, according to the proclamation.

Meanwhile, in the same year, the Department of Homeland Security initiated more than 800 human trafficking cases, resulting in at least 1,500 arrests and 530 convictions. Health and Human Services modernized the National Human Trafficking Hotline while the Department of Transportation recently established an advisory committee on the best practices to combat human trafficking.

“Under my Administration, the Federal Government will continue to play a leading role in the fight against human trafficking,” Trump’s proclamation said. “But all Americans can help in this effort by recognizing key indicators that can potentially save a life.”

Trump said that he would “not rest” until human trafficking was completely eradicated and described it as a “blight on humanity and an “affront to our fundamental values.”

“As a Nation, we cherish and uphold the notion that all people are created with inherent dignity and entitled to life, liberty, and the pursuit of happiness,” the proclamation reads. “Human trafficking and enslavement rob victims of these God-given endowments.”