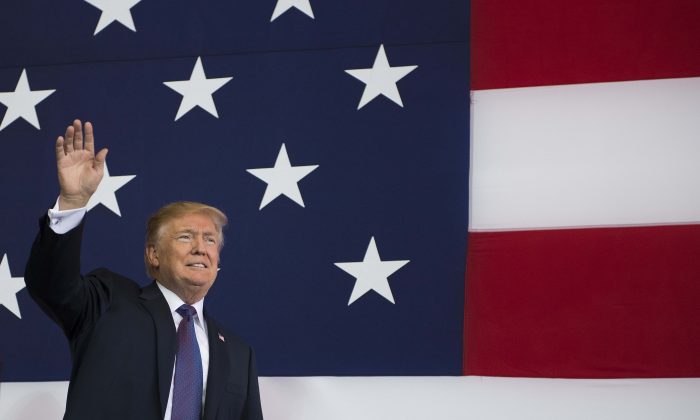 President Donald Trump waves as he arrives to speak to U.S. military personnel at Yokota Air Base in Tokyo on Nov. 5, 2017. (JIM WATSON/AFP/Getty Images)
Asia & Pacific

President Donald Trump praised American airmen and Marines, as well as Japan’s Self-Defense Force, during a visit to the Yokota Air Base in Japan on Nov. 5.

Trump also issued a stark warning against dictators and other regimes not to underestimate America’s resolve.

“Together with our allies, America’s warriors are prepared to defend our nation using the full range of our unmatched capabilities,” Trump said.

Trump praised the troops as the greatest hope for people who desire to live in freedom and harmony. While at the same time being the greatest threats to tyrants and dictators who seek to prey on the innocent.

“History has proven over and over that the road of the tyrant is a steady march toward poverty, suffering, and servitude,” Trump said.

“But the path of strong nations and free people, certain of their values and confident in their futures, is a proven path toward prosperity and peace. We cherish our cultures, we embrace our values, and we always fight for what we believe in.”

Trump is currently in Japan as part of a 12-day tour in Asia. One of the key objectives of the trip is to work with other countries in the region to counter the North Korean nuclear threat.

President Trump has vowed not to accept a nuclear-armed North Korea, and is using diplomacy, economic sanctions, and the threat of military force, to get the regime in Pyongyang to the negotiating table.

So far North Korea has been unwilling to negotiate abandoning its nuclear weapons program. However, there are increasing signs that new and stronger sanctions imposed on North Korea are having an effect.

In a letter by North Korea’s U.N. envoy, sent on Friday, the regime complains of the significant impact the sanctions are having.

Trump is expected to pressure China to do more to put pressure on North Korea.

Trump praised the military service members for their service, as well as their families.

“Because of you, the people of America, the people of Japan, and the freedom-loving people everywhere are able to fulfill their destinies and follow their dreams,” he said.

“We are grateful for your families, for their sacrifice and support that allows our brave men and women to serve. We also appreciate the sacrifice of dedicated civilians who keep this base going and take care of our military and their precious loved ones.”

The Yokota air base houses an estimated 14,000 personnel. It is also home to the Air Defense Command of the Japanese Air Self-Defense force. The base is a critical center of coordination between Japanese and American troops.

“With your presence here today, shoulder-to-shoulder, you put hope into every soul that yearns for peace. All of you have made Yokota one of the most capable operational bases in Japan and, actually, anywhere in the world,” Trump told the American and Japanese service members.

The Yokota air base was built in 1940 and was used during the Korean War for reconnaissance and bomber missions by American aircraft.