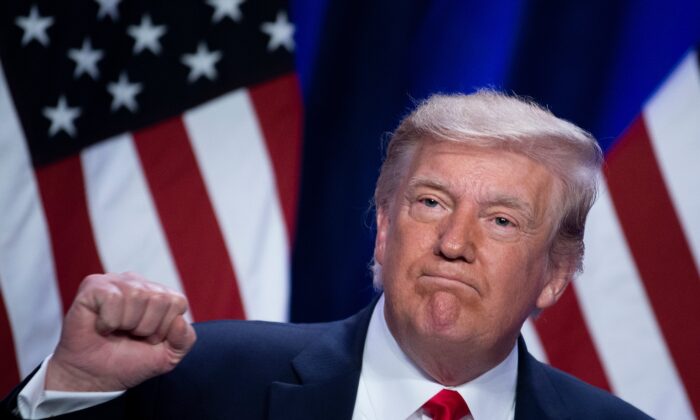 President Donald Trump is slated to announce a measure that designates far-left movement Antifa and the Ku Klux Klan (KKK) as terrorist organizations, calling for lynching to be made a federal hate crime.

Trump on Friday said he will provide details about his plan for black America, including a pledge to access capital in black communities by about $500 billion.

The move is likely an attempt for Trump to further try and peel away black voters’ support from Democratic nominee Joe Biden.

“For decades, Democrat politicians like Joe Biden have taken black voters for granted. They made you big promises before every election—and then the moment they got to Washington, they abandoned you and sold you out,” Trump said in an event in Florida. “The Democrats will always take Black voters for granted until large numbers of black Americans vote Republican.”

Trump will also make Juneteenth a national holiday, or a celebration of the emancipation of those who had been enslaved in the United States, according to Trump’s speech, reported Fox News.

The president will also designate Antifa, which is described as an anarcho-communist movement, a terrorist organization, the report said. Earlier this summer, amid far-left unrest and riots, Trump announced on Twitter that he would declare it as such, although action has yet to be taken by his administration.

“Instead of fighting for public safety for these communities, the Democrats are attacking our police and empowering far-left rioters, looters, and anarchists,” the president said. “In the Republican Party, we believe in protecting all black lives–including the unborn.”

It added: “Every child, of every race–born and unborn–is made in the Holy image of God. Republicans believe that all human life is sacred … at no time before has there been a clearer choice between two parties, two visions, two philosophies, and two agendas for the future.”

Meanwhile, according to a copy of his speech, he will promise to increase safety in black communities.

Trump’s move to designate Antifa as a terrorist organization came after FBI Director Christopher Wray told Congress that those who engaged in recent violent protests are targets of serious FBI investigations.

“We have seen Antifa adherence coalescing and working together in what I would describe as small groups and nodes,” Wray has said. Wray added that the bureau is conducting multiple investigations “into some anarchist violent extremists, some of whom operate through these nodes.”

Before that, Attorney General William Barr in August said Antifa is a “revolutionary group” that is bent on establishing communism or socialism in the United States.

“They are a revolutionary group that is interested in some form of socialism, communism. They’re essentially Bolsheviks. Their tactics are fascistic,” Barr said in an interview with Fox News on Aug. 9.

Kyle Shideler, director and senior analyst for Homeland Security and Counterterrorism at the Center for Security Policy, told The Epoch Times that Barr and other federal officials need to “treat the group as the subversive and insurrectionist force it is.”

“Antifa’s distributed and non-hierarchical network structure requires better intelligence to counter,” he said, noting that the federal government has a unique responsibility to address this threat.

Reuters and Bowen Xiao contributed to this report.