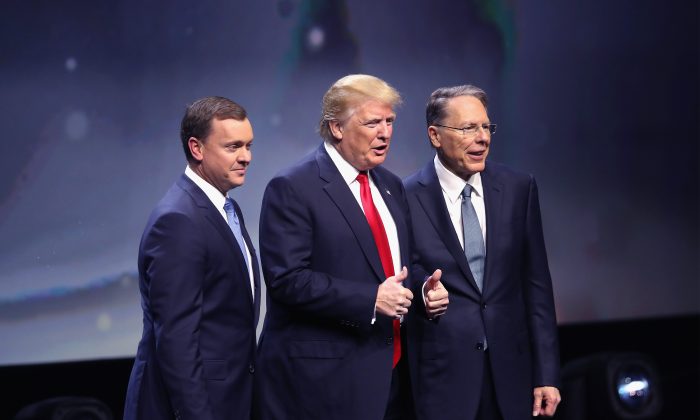 Republican presidential candidate Donald Trump is introduced with Chris Cox (L), Executive Director of the NRA Institute for Legislative Action and Wayne LaPierre (R), Executive Vice President of the National Rifle Association, at the National Rifle Association's NRA-ILA Leadership Forum during the NRA Convention at the Kentucky Exposition Center on May 20, 2016 in Louisville, Kentucky. (Photo by Scott Olson/Getty Images)
2016 race

Trump Picks up Powerful Endorsement From the NRA

The National Rifle Association endorsed Donald Trump for President at their organization’s leadership forum in Louisville, Kentucky on May 20.

Right before the presumptive Republican nominee walked onstage to give a much anticipated speech, the executive director of the NRA’s Institute for Legislative Action Chris Cox endorsed Trump:

“We have to unite, and we have to unite right now. So on behalf of the thousands of patriots in this room and the 5 million NRA members across this country and the tens of millions who support us, I’m officially announcing the NRA’s endorsement of Donald Trump for president,” Cox said.

“Now is the time to unite. If your preferred candidate got out of the race, it’s time to get over it,” Cox continued.

Cox used a clip of Hillary Clinton saying “the Supreme Court is wrong on the Second Amendment” as a backdrop to the general election matchup between Trump and Clinton:

Wayne LaPierre, NRA’s executive vice president, also had harsh words for the former Secretary of State, asking if the crowd was “ready to send Hillary into retirement? Or maybe an orange jumpsuit.”

He continued, energizing the crowd:

“We in this room, we are America’s best hope, and this is our moment. In all of history, there’s always been a time and a place when patriots stand up and rise up against the decree of the elites and shout, ‘No more! Get your hands off my freedom!'” LaPierre said.

Donald Trump graciously accepted the endorsement and thanked the NRA for their support.

“The NRA has led the fight time and time again to protect our fundamental freedoms. This is an amazing group. I’ll tell you, Chris, and Wayne, and all of the people—and I’ve gotten to know a lot of [them] … these are incredible people,” Trump said during his address.

“And they really believe—this isn’t like a job—they really, really believe, and we’re all lucky to have people like that, I will tell you. Really lucky. Of course, if they didn’t endorse me maybe I wouldn’t say that.”