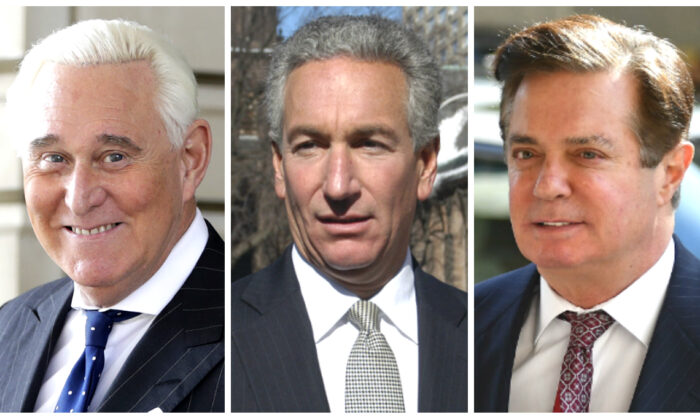 President Donald Trump on Dec. 23 issued pardons for another 26 people, among whom are former campaign chairman Paul Manafort and longtime adviser Roger Stone. He also pardoned Charles Kushner, a real estate developer and the father of his son-in-law, Jared Kushner.

The president also commuted part or all of the sentences for three other people.

The latest actions, coming just after Trump arrived in Palm Beach, Florida, for the holiday season, marks a second wave of clemency actions in the last two days, and brings the number of people Trump has pardoned or commuted sentences for to 49.

Manafort and Stone were among several Trump associates who faced charges as a result of former special counsel Robert Mueller’s investigation into alleged Russian interference in the 2016 presidential election.

Trump’s pardoning of Manafort spared the long-time Republican operative from serving the bulk of his prison term of 7 1/2 years.

“Mr. Manafort has already spent two years in prison, including a stretch of time in solitary confinement—treatment worse than what many of the most violent criminals receive. As a result of blatant prosecutorial overreach, Mr. Manafort has endured years of unfair treatment and is one of the most prominent victims of what has been revealed to be perhaps the greatest witch hunt in American history,” the White House statement reads.

“As Mr. Manafort’s trial judge observed, prior to the Special Counsel investigation, Mr. Manafort had led an ‘otherwise blameless life.’ Since May, Mr. Manafort has been released to home confinement as a result of COVID-19 concerns.”

Trump had previously commuted Stone’s sentence earlier this year in July, a day before Stone was due to begin serving a term of three years and four months. Stone was convicted in November 2019 by a Washington jury of lying under oath to lawmakers who were investigating Russian interference in the 2016 election.

“Mr. Stone is a 68-year-old man with numerous medical conditions. Due to prosecutorial misconduct by Special Counsel Mueller’s team, Mr. Stone was treated very unfairly,” the statement reads. “He was subjected to a pre-dawn raid of his home, which the media conveniently captured on camera. Mr. Stone also faced potential political bias at his jury trial. Pardoning him will help to right the injustices he faced at the hands of the Mueller investigation.”

In May 2017, then-special counsel Mueller took over the FBI’s investigation into allegations of Russian interference in the 2016 U.S. presidential elections. Mueller’s report in 2019 stated that while Russia did attempt to interfere in the election, there was no evidence to establish that Trump or any other U.S. citizen knowingly colluded with Russia ahead of the election.

Kushner, the father of Trump’s son-in-law, Jared Kushner, was sentenced to two years in prison after pleading guilty in 2004 to 18 counts of tax evasion, witness tampering, and making unlawful campaign donations.

The White House announced that since completing his sentence in 2006, Kushner had been devoted to important philanthropic organizations and causes, including Saint Barnabas Medical Center and United Cerebral Palsy.

The announcement also noted that supporters of a pardon for Kushner include U.S. Attorney for the District of Utah Brett Tolman, as well as American Conservative Union Chairman Matt Schlapp and Deputy Director David Safavian.