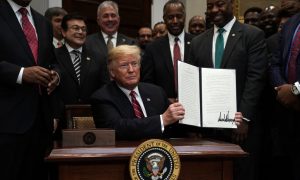 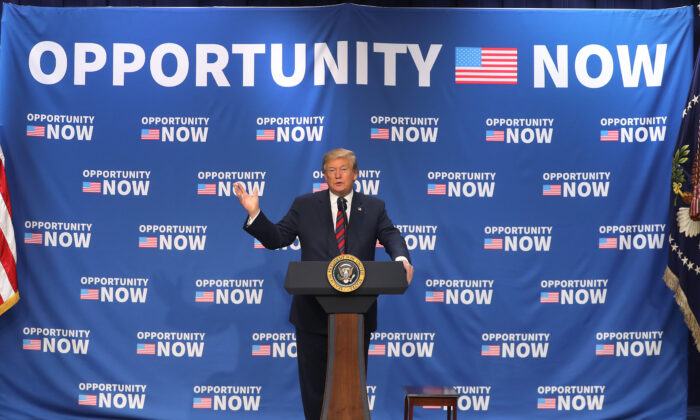 WASHINGTON—President Donald Trump issued on Aug. 24 an executive order to direct federal agencies to prioritize moving their facilities to distressed areas, including opportunity zones, in an effort to lower costs and uplift poor communities.

The new order could help support investments in any of the 8,766 distressed areas designated as opportunity zones, a bipartisan incentive created by the 2017 Tax Cuts and Jobs Act.

In the past, federal agencies were encouraged to consider locating facilities in central business districts, which were often the most expensive areas, according to a White House statement.

But the new order will change that policy and “invest Federal resources in distressed areas and save taxpayer dollars.”

The move would continue a recent trend of agencies moving some of their offices outside Washington. In 2019, the Agriculture Department relocated two research offices with nearly 70 employees to Kansas City. In addition, the Interior Department’s Bureau of Land Management moved about 300 employees from the District of Columbia to cities in the West.

John Lettieri, president and CEO of the Economic Innovation Group (EIG), said the president’s executive order is “a good start.”

“This is an appropriate way that the federal government can use its resources and its footprint to support reinvestment, redevelopment of underserved areas of the country,” he told The Epoch Times.

The idea of opportunity zones was first coined by the EIG, an advocacy organization co-founded by Sean Parker, a Silicon Valley entrepreneur and founder of Napster.

It was originally introduced in a 2015 paper, “Unlocking Private Capital to Facilitate Economic Growth in Distressed Areas,” to help address the persistent poverty and uneven recovery in American communities.

Sen. Tim Scott (R-S.C.), who grew up in poverty in a single-parent household, supported the idea by introducing the bipartisan-backed “Investing in Opportunity Act” and made it part of Trump’s tax-reform plan.

The opportunity zones offer tax breaks to private funds that invest in these economically underserved communities.

Nearly $75 billion in private capital flowed into the opportunity zones between the second quarter of 2018 and the fourth quarter of 2019, according to an initial assessment report by the White House Council of Economic Advisers (CEA).

The program boosted the private equity investments in opportunity zones by 41 percent, according to the report. That was 29 percent higher than the investment that flowed into the eligible communities that weren’t selected as opportunity zones.

The CEA estimated that the fund raised for opportunity zones could lift 1 million people out of poverty, slashing poverty in these areas by 11 percent.

The COVID-19 pandemic, however, had some effect on investment activity in these underserved communities.

“It’s safe to assume that it’s had a somewhat negative impact at least in the short term, but at the same time we know that many major projects and major investments are still moving forward,” Lettieri said.

“This is a long-term policy. And there’s absolutely a strong incentive to continue investing not just this year or next year but really all the way through the program.”

Opportunity zone designations certified by the Treasury Department will remain in effect until the end of 2028.

EIG recently called on Congress to build stronger reporting requirements and transparency to better track the impact of the incentive on communities.

There has been a bipartisan push to move some federal agencies outside the Beltway to help distressed communities.

Sens. Josh Hawley (R-Mo.) and Marsha Blackburn (R-Tenn.) introduced in 2019 the HIRE Act that proposed moving most federal agencies out of Washington and into the heart of America.

“Federal agencies that aren’t directly tied to general government activities (e.g., the NIH) should be relocated to different areas throughout the country to provide a boost to local economies,” he stated on his campaign website in 2019.