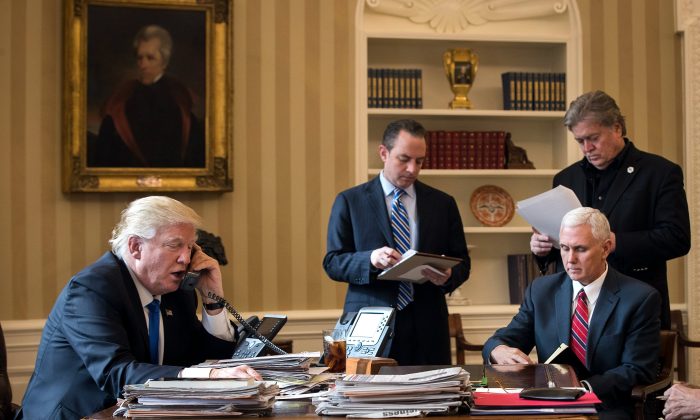 Trump on Phone Calls With Foreign Leaders: ‘Don’t Worry About It’

President Donald Trump, speaking at the National Prayer Breakfast on Thursday, made reference to phone calls he made with several world leaders, which were apparently leaked to the press on Wednesday night.

Meanwhile, on Twitter, the president seemingly made a reference to one of his phone calls with Australian Prime Minister Malcolm Turnbull, saying: “Do you believe it? The Obama Administration agreed to take thousands of illegal immigrants from Australia. Why? I will study this dumb deal!”

According to The Washington Post, which apparently obtained leaked transcripts of the call, Trump wasn’t pleased with Australia sending 1,250 asylum seekers to the United States.

In a controversial move, Australia refused to accept the refugees—most of them from Iran, Afghanistan, and Iraq. They’re holding them in islands off Australia on Nauru and in Papua New Guinea in detention centers.

Australia has been slammed by the United Nations and human rights groups for refusing to resettle the refugees.

Turnbull said he was unhappy that details of the call were leaked to the press, saying the call was “very frank and forthright,” the BBC reported.

He added: “The report that the president hung up is not correct.”

“I can assure you the relationship is very strong,” Turnbull noted. “The fact we received the assurance that we did, the fact that it was confirmed, the very extensive engagement we have with the new administration underlines the closeness of the alliance. But as Australians know me very well: I stand up for Australia in every forum—public or private.”

The State Department said in a statement on Thursday that the United States would honor the deal “out of respect for close ties to our Australian ally and friend.”

“President Trump’s decision to honor the refugee agreement has not changed and Spokesman Spicer’s comments stand,” the State Department added.