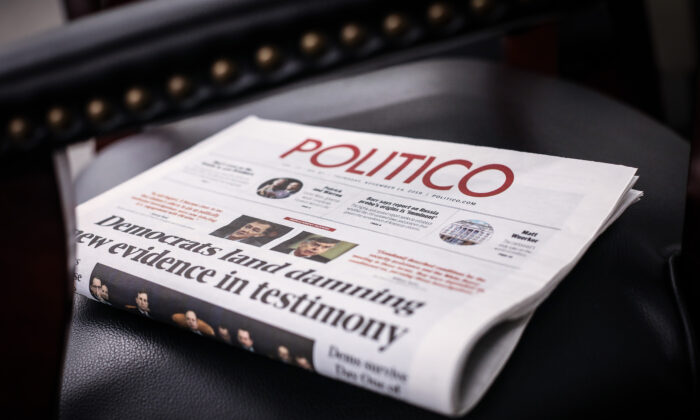 A senior member of President Donald Trump’s National Security Council (NSC) has filed a $25 million lawsuit in Virginia state court, accusing the popular media outlet Politico of intentionally publishing false statements about him to undermine his credibility and ability to serve his country at the NSC.

The increasingly acrimonious impeachment inquiry now underway against the president has spawned plenty of legal threats, subpoenas, and accusations, and, now, its first defamation suit. As the inquiry intensifies, more legal proceedings may follow.

The NSC official is lawyer Kashyap “Kash” Patel, who joined the White House staff in February after working for Rep. Devin Nunes (R-Calif.), now the ranking member of the House Permanent Select Committee on Intelligence.

That committee, headed by Rep. Adam Schiff (D-Calif.), has been taking the lead in the impeachment inquiry now underway and as the process heats up, Republican members of that panel have been subject to scathing attacks by Democrats and journalists. Schiff, in turn, has been repeatedly mocked by Trump in public statements and on Twitter.

The left has been working to discredit Patel since he helped write the Foreign Intelligence Surveillance Act “Spygate” memo in early 2018 that examined alleged surveillance abuses by senior Obama-era officials at the Department of Justice, Debra Heine at American Greatness wrote.

Nunes, in particular, and those associated with him have been singled out for ridicule by critics for, among other things, questioning the significance of Russian interference in the 2016 election.

The legal action puts Schiff and House impeachment leaders on the defensive. Schiff himself is accused in the suit of being “a demagogue with an ax to grind against the president,” and who ignores proper procedure “to create click-bait headlines and soundbites to feed to his co-conspirators and media sympathizers.”

Bertrand’s Oct. 23 Politico story, “Nunes protégé fed Ukraine info to Trump,” indicated that Patel “was among those passing negative information about Ukraine to President Donald Trump earlier this year, fueling the president’s belief that Ukraine was brimming with corruption and interfered in the 2016 election on behalf of Democrats.”

Patel was “so involved in the issue,” according to the article, that “at one point, Trump thought he was in charge of Ukraine policy for the National Security Council.”

“Patel’s involvement demonstrates that the president had at least some support for the scheme from within the NSC,” the article said. The scheme, in this case, refers to efforts to pressure Ukraine to carry out investigations that would benefit Trump politically.

Patel’s legal complaint states that “at no time” before Oct. 30 had Patel “ever communicated with the president on any matters involving Ukraine. … [Patel] never supplied any Ukraine ‘materials’ to the president.”

Earlier this month, Patel publicly stated that several media outlets “have falsely reported that … I have communicated with President Trump regarding Ukraine.”

Politico, Bertrand, and Allbritton “acted intentionally and with actual malice, ill-will, spite, and an unbridled desire to injure” Patel, the legal document states. The punitive damages would serve to “punish these Defendants and to deter other so-called ‘journalists’ from using their pens as swords in a similar way.”

The complaint states that the defendants in the lawsuit “acted in concert” with Schiff to support the impeachment inquiry and worked to destroy Patel’s reputation as an attorney and presidential aide, in order to advance “Schiff’s baseless Ukrainian quid pro quo hoax.”

The document begins with what amounts to a short essay on the supposedly sorry state of the media today.

“We live in the era of weaponized media,” the legal complaint states.

“The days of the mild-mannered reporter—covering a beat, gathering facts and truthfully reporting about ‘the news that’s fit to print’—are over. The venerable ‘Fourth Estate’ has been replaced by partisan hacks and character assassins who work to advance the interests and agendas of dark money. One of the very worst offenders in the business is ‘Politico.’”

Dark money, according to one well-accepted definition, refers to political spending by nonprofit organizations such as social welfare groups, labor unions, and trade associations that aren’t required by law to identify their donors. Some political activists object to dark money because voters don’t learn where the money spent to influence elections originated.

The case at hand, the complaint states, “is about Politico’s malicious efforts in 2019 to target and destroy the stellar career and reputation of a dedicated attorney, senior advisor and civil servant” in a series of articles and Twitter posts that “directly and by implication, falsely accused Kash Patel of lying, deceit and unethical conduct.”

Brad Dayspring, Politico’s vice president of communications and marketing, said in a statement: “This lawsuit is high on bombast and low on merit. It is unserious and is a public relations tactic designed to intimidate journalists and media organizations from doing their job.”