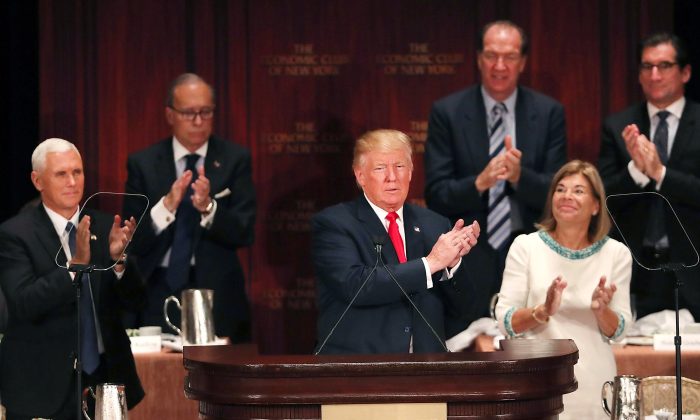 NEW YORK—Donald Trump pledged that he would “Make America Wealthy Again” by cutting taxes, reducing regulations, and bringing jobs back to America, at the Economic Club of New York on Sept. 15.

“Low-income Americans will pay no income tax at all,” Trump said to the crowd at the Waldorf-Astoria in Manhattan. “In fact, our plan will remove millions and millions of workers from the income tax rolls entirely.”

Responding to reports last month that second quarter growth had shrunk to 1.1 percent, Trump said that his presidency would bring back faster growth to America.

“Over the next 10 years, our economic team estimates that under our plan the economy will average 3.5 percent growth and create a total of 25 million new jobs,” he said, adding that he would like to bring growth up to 4 percent or more.

“I think we can do better than that,” he added.

He also restated his promise to slash taxes from 35 percent to 15 percent and realign the tax bracket system from a seven bracket system to a three bracket tax plan which includes brackets of 12 percent, 25 percent, and 33 percent, similar to a plan laid out by Speaker of the House Paul Ryan (R-Wis.).

The tax plan will be interwoven with the child-care plan Trump rolled out earlier this week together with his daughter Ivanka.

Trump used Flint, Michigan, as an example of government wrongdoing and compared the city with Mexico.

Trump visited Flint earlier this week and spoke about ways to grow the economy in the city that has seen a crisis after the water was deemed undrinkable in 2014.

“In short, the city of Detroit is the living, breathing example of my opponent’s failed economic agenda,” he said in August. “Every policy that has failed this city, and so many others, is a policy supported by Hillary Clinton.”

A teleprompter that Trump used during his speech kept shutting off and then working again. In recent weeks, the candidate— who previously mainly relied on off the cuff speeches—has been using the device for most of his speeches.

“We’re having a lot of fun on the campaign and on the trail. I just wanted to say that—and it’s always a lot of fun when you come up, and the people don’t have the teleprompter working, but that’s OK,” Trump said.

“Lucky I brought some notes,” he said before continuing his speech.

He even worked the teleprompter glitch into the substance of his speech.

“Everything that is broken today can be fixed. And every failure can be turned into a truly great success. Just look at the way I just melded into the teleprompter that just went off,” Trump remarked minutes later. “Who else could have pulled that off, OK? Who else?”