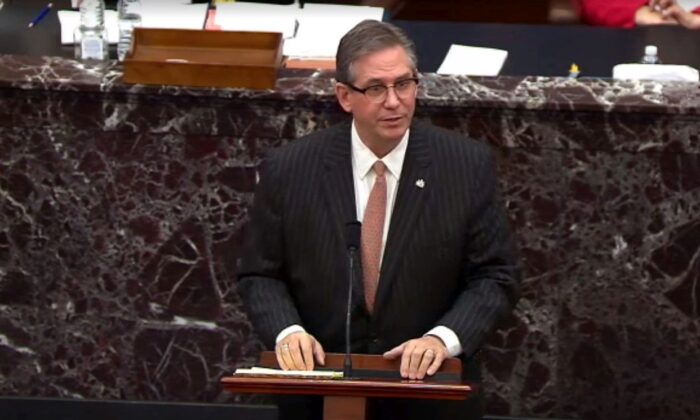 Trump Lawyers’ Opening Argument: ‘Majority in the House’ Afraid of Facing Trump in the Future

Former President Donald Trump’s lawyers on Tuesday made their opening argument in the Senate impeachment trial, asserting that House Democrats impeached Trump because they are fearful of facing him as a political opponent in 2024.

“You will never hear anybody representing former President Trump say anything at all other than, what happened on January 6 in the storming and the breaching of the Capitol should be denounced in the most vigorous terms,” the former president’s lawyer, Bruce Castor, said on the floor of the Senate.

Castor, echoing arguments he and other attorneys made in pre-trial briefs, said that it is against the Constitution for the Senate to hold a trial to convict a former president, suggesting that Democrats only want to prevent Trump from running—or holding office—in the future.

“We are really here because the majority in the House of Representatives does not want to face Donald Trump as a political rival in the future, that’s the real reason we’re here,” he said, adding that “the political pendulum will shift one day—this chamber and the chamber across the way will change one day and partisan impeachments will become commonplace.”

The House impeached Trump last month for allegedly inciting violence during the U.S. Capitol breach on Jan. 6. Trump, for his part, denied the claims and his lawyers said he is protected under the First Amendment. No criminal charges have been filed against the former president.

Rep. Joe Neguse (D-Colo.), one of the House managers, said that there is “no January exception to the impeachment power, that presidents can’t commit grave offenses in their final days and escape any congressional response,” pushing back against the argument that Trump cannot be impeached after leaving office.

And his fellow manager, Rep. David Cicilline (D-R.I.), said the Capitol riot was a “disaster of historic proportion,” adding that the rioters “could have killed all of us.”

“At least seven people lost their lives, more than 140 law enforcement officers suffered physical injuries, and many more have been severely impacted by their experiences that day,” the text at the end of the video reads. The video did not include Trump’s remarks to supporters that they should make their voices heard “peacefully and patriotically.”

The Senate trial appears to be doomed to fail. Last month, only five GOP senators joined Democrats in voting in favor of the trial. The Senate requires 67 votes to convict a president.