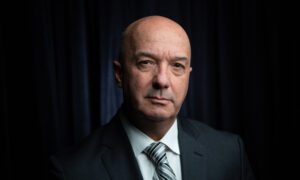 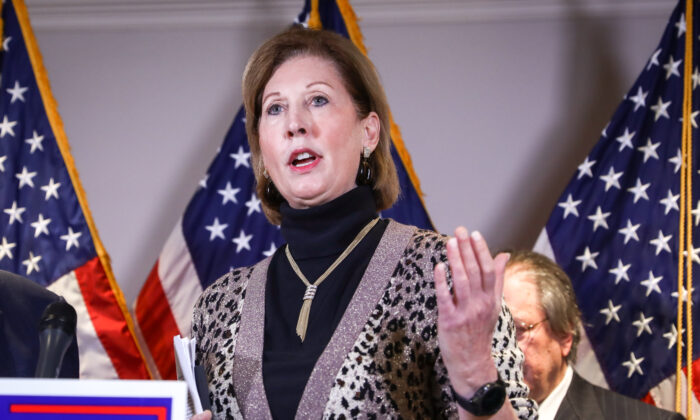 Lawyer Sidney Powell: ‘President Trump Won by a Landslide, We Are Going to Prove It’

Trump campaign attorney Sidney Powell said during a Nov. 19 press conference that President Donald Trump “won by a landslide,” saying that their legal team will prove it.

“American patriots are fed up with the corruption from the local level to the highest level of our government,” she said.

Powell alleged a transnational conspiracy involving the “influence of communist money” from countries including Cuba, Venezuela, and “likely China” to overturn the presidential race via election software. The longtime lawyer, who represented Lt. Gen. Michael Flynn, then called on the Department of Justice to launch a criminal investigation.

Powell, a former prosecutor, made reference to a whistleblower who came forward and witnessed how voting software can secretly manipulate votes. The person said they worked with the Venezuelan military, outlining a conspiracy between Smartmatic executives, former socialist Venezuelan dictator Hugo Chavez, and election officials in the country years ago.

The whistleblower said the “software and fundamental design of the electronic electoral system and software of Dominion and other election tabulating companies relies upon software that is a descendant of the Smartmatic Electoral Management System.”

“In short, the Smartmatic software is in the DNA of every vote-tabulating company’s software and system,” the whistleblower said.

Smartmatic spokeswoman Samira Saba denied Powell’s allegations to news outlets: “Smartmatic has registered and counted nearly 5 billion auditable votes without a single spoiled vote or security breach. We designed our technology to enable all election stakeholders audit the entire process. All audits conducted to elections in which our technology was employed proved the integrity of results.”

Powell alleged that Smartmatic used technology that was developed under Chavez’s regime years ago to “make sure he never lost an election.” Chavez died in 2013.

Dominion and Smartmatic didn’t immediately respond to a request for comment from The Epoch Times.

Smartmatic has denied any ties to Dominion, while Dominion said that it has “no company ownership relationships with the Pelosi family, Feinstein family, Clinton Global Initiative, Smartmatic, Scytl, or any ties to Venezuela.” Dominion bought assets from a subsidiary of Smartmatic three years after it was sold. Smartmatic wrote on its website that it “does not have any ties to any governments or political parties in any country. It has never been owned, funded or backed by any government.”

Attorney Lin Wood, who filed a lawsuit alleging election irregularities in Georgia, wrote that Smartmatic’s statement that it has no ties with Dominion is a lie, adding that a fact-checking website that contained the companies’ statements is “paid to publish propaganda.”

Also in the news conference, former New York City Mayor Rudy Giuliani noted that there were affidavits filed in battleground states that allegedly point to a centrally run voter fraud scheme to overturn the election in favor of Democratic challenger Joe Biden.

“In the city of Atlanta, Republicans were not allowed to watch the absentee mail-in ballot process. Inspections completely cast aside. And we have numerous double voters, we have numerous out-of-state voters, and we have specific evidence of intimidation and changes of vote. That will all be in the lawsuit that comes out tomorrow,” Giuliani said.

A number of secretaries of state in Arizona, Pennsylvania, Georgia, Michigan, and elsewhere have said they have seen no evidence of voter fraud that would overturn the election results. Earlier this week, the Department of Homeland Security’s (DHS) Cybersecurity and Infrastructure Security Agency (CISA) said the Nov. 3 election was the “most secure” in history.

The head of the Federal Elections Commission, Trey Trainor, cast doubt on many of the officials’ claims that there was no fraud, saying he believes “there was fraud” in key states.

Trump fired Christopher Krebs, the former head of CISA, several days ago, after the election security statement. Krebs, on Nov. 18, attempted to qualify his remarks on Twitter, writing that “I never claimed there wasn’t fraud in the election, [because] that’s not CISA’s job—it’s a law enforcement matter.”

“We did provide info on measures election officials use to prevent and detect dead voters, tho,” he wrote.