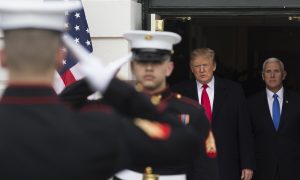 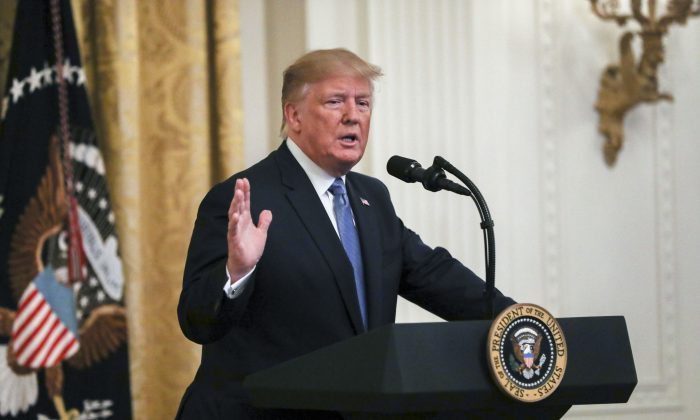 President Donald Trump speaks about his administration's environmental initiatives in the East Room of the White House in Washington on July 8, 2019. (Charlotte Cuthbertson/The Epoch Times)
2020 Election

The president said that the water and air in the United States are cleaner than in any other nation in the world. Environmental officials pointed to progress made on reducing carbon dioxide and methane emissions, cleaning up hazardous waste sites, and removing plastic debris from the world’s oceans.

“Among the heritage we must preserve is our country’s incredible natural splendor. That is the shared obligation that brings us together today,” Trump said.

The president noted that the United States is ranked first in the world in terms of access to clean drinking water. In one measure of air quality, the United States has six times fewer pollutant particles than the global average, he noted.

Trump campaigned on a promise to quit the Paris climate accord and withdrew from the pact a few months after taking office. The president described the accord as “unfair, ineffective, and very very expensive.” His exit from the treaty is representative of the administration’s overall results-focused, America-first approach to environmental policy.

Mary Neumayr, chairwoman of the Council on Environmental Quality, told reporters on July 8 that Trump views a healthy economy as a prerequisite for a clean climate. The resources and advantages derived from a powerful economy can be used to improve the environment, Neumayr said.

“The president recognizes that a strong economy is critical for technology and innovation, for modern resilient infrastructure, and for environmental protection,” Neumayr said. “We want to pursue a strong economy so that we will have the resources to advance technology and innovation, and build more modern and resilient infrastructure, and provide for environmental protection.”

Trump’s critics, aided by establishment media, have attacked the president’s practical approach, accusing him of sacrificing the climate for profits. Despite the accusations, the United States continues a decades-long trend of improving air and water quality.

“For years, politicians told Americans that a strong economy and a vibrant energy sector were incompatible with a healthy environment. In other words, one thing doesn’t go with the other. And that’s wrong, because we’re proving the exact opposite,” Trump said.

The United States is one of the few industrialized nations to meet the environmental goals set out in the Paris accord even after having quit it. Trump noted that every signatory of the accord lags behind the United States in reducing carbon emissions.

The president contrasted his approach with the socialist Green New Deal policy proposal backed by more than 100 House Democrats, which, by one estimate, would cost U.S. taxpayers $93 trillion over the course of a decade. Trump called the price tag “unthinkable” and “not affordable even in the best of time.” The projected total spending for the next 10 years is roughly $60 trillion.

Among other achievements, Trump lauded the progress made by the EPA’s Superfund program to clean up hazardous waste sites. In 2018, the EPA was able to remove 22 Superfund sites from the list of national priorities, the most since 2005.

Bruce Roebuck, the owner of a local bait shop in Florida, took to the podium beside Trump to talk about the impact of the administration’s work on battling toxic algae in Lake Okeechobee. Roebuck has been forced to close his stores several days a week because people were afraid to touch the algae-infested water.

“Your completion of this Herbert Hoover Dike is going to make a tremendous difference,” Roebuck said, describing how the dike will help safely store more water in the lake and prevent fertilizer, contaminants, and algae from going downstream.