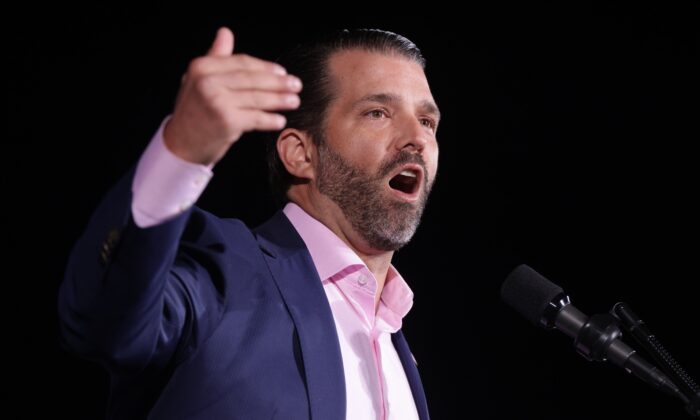 Trump Jr.: Impeachment Push Is a Waste of Time and Reflects a Double Standard

Donald Trump Jr.. said in an interview with Fox News’ Sean Hannity on Tuesday that the push to impeach former President Donald Trump is both a waste of time and a partisan effort that reflects a double standard.

Trump Jr. said that the urgency of the pandemic suggests other legislative priorities should take precedence over a second push to impeach his father.

Both Republican and Democratic lawmakers have publicly stated that they want a speedy trial, as the Senate cannot move forward with its legislative priorities until the trial is complete.

The trial will kick off on Wednesday at around 1 p.m., with six Republicans on Tuesday voting to go ahead with the trial, joining all members of the Democrats caucus in saying it is constitutional.

Trump Jr., in remarks to Hannity, denounced what he called a “double standard” in the impeachment push, arguing that his father’s rhetoric, which Democrats argue amounted to “incitement of insurrection,” was much the same as fiery stump speeches delivered by lawmakers on both sides of the aisle.

“You sort of highlighted all the hypocrisy that we saw during 10 months of rioting, looting, arson, in-your-face type of politics,” Trump Jr. said. “Candidly, whatever my father said on January 6th was mild in comparison, but if you were to take his speech and compare it to literally any stump speech ever given in the history of politics, you would see absolutely no deviation.”

“If it wasn’t for double standards, the Democrats would have no standards at all,” Trump Jr. said.

While Trump said in his Jan. 6 speech that “we fight like hell and if you don’t fight like hell, you’re not going to have a country anymore,” the former president called on supporters to “peacefully and patriotically” make their voices heard during the joint session of Congress and later denounced the day’s violence.

Trump’s lawyers insist in filings that the former president is not guilty on the sole charge of “incitement of insurrection,” calling his rhetoric in the Jan. 6 speech a mere figure of speech.

The lawyers also contend that the incitement of insurrection charge against Trump is grossly exaggerated.

The Democrat impeachment managers have pushed back against the argument that Trump was exercising his First Amendment rights.

“The House did not impeach President Trump because he expressed an unpopular political opinion. It impeached him because he wilfully incited violent insurrection against the government,” they argued in their own filings.