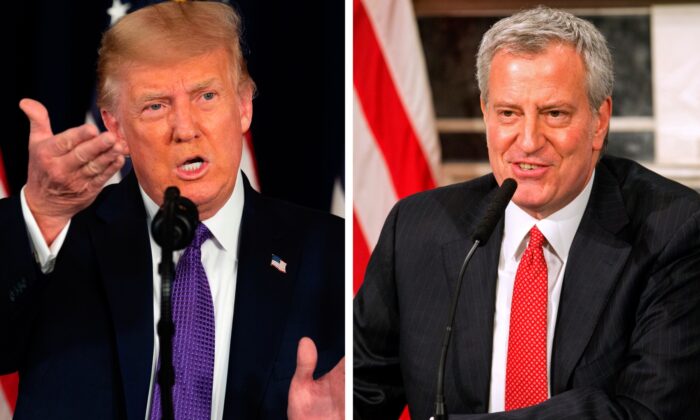 President Donald Trump on Aug. 16 issued a warning to New York City Mayor Bill de Blasio following a wave of gun violence in the city over the weekend that left at least seven people dead.

The president appeared to suggest that unless the mayor’s office is able to tackle the recent surge in violent crime in the city, the federal government would step in.

“Law and Order. If @NYCMayor can’t do it, we will!” Trump wrote.

It came as at least 52 people were shot in the nation’s most populous metropolis in the space of 72 hours since Aug. 13, according to ABC 7. The city has seen a spike in violent crime in recent months.

On the morning of Aug. 15 in Queens, a gunman killed off-duty corrections officer John Jeff with his own department-issued service weapon as he was walking with a colleague. He later died in the hospital with gunshot wounds to the head and chest. Police are still searching for the suspect.

In Brooklyn, a 47-year-old died in Prospect Lefferts on Parkside Avenue and Ocean Avenue on Aug. 15. The victim was discovered with two gunshot wounds to the head and was pronounced dead at the scene.

The NYPD has repeatedly complained that last year’s bail reforms let criminals stay out of jail even after repeated arrests. Another contributing factor to the recent surge in violence could be that as the city was hit hard by the COVID-19 outbreak, many city services were curtailed or shut down, with courts adjudicating only the most pressing cases. Others, such as those involving gun possession, have piled up.

Meanwhile, the city council, at Mayor Bill de Blasio’s recommendation, recently slashed the NYPD budget by $1 billion amid a massive budget shortfall caused by the pandemic lockdown, as well as calls from some politicians to defund the police completely.

Responding to Trump’s remarks, the mayor said during a press briefing Monday that the city will continue to rely on the NYPD in addressing the surge in violent crime.

“We are dealing with a perfect storm … We have been put through hell on the city,” de Blasio told reporters. “Everything fell apart simultaneously because of the coronavirus.  ”

“We’re now building it back up and the NYPD is moving officers where they’re needed, engaging with the community more deeply to fight crime, increasing gun arrests, but it will take time, and we need the whole picture to come back into focus.”

“The bottom line is, the NYPD is, obviously, as they have done for decades upon decades, they are the people who can help us address this issue and end this violence and that’s who I’m relying on,” the mayor added.

The NYPD did not respond to a request for comment from The Epoch Times.