The impeachment effort against former President Donald Trump is “political theater” that goes against the history of the United States and the American Constitution itself, according to constitutional attorney Rick Green.

“When we have political actors involved, we get political theater. And that’s a lot of what we’re getting here. Is this the judiciary now? Is the Senate now the judiciary that will try any citizen? Because an impeachment is specifically for someone that is in office, according to the American Constitution,” Green, a former Texas state representative and co-founder of the Patriot Academy, told “American Thought Leaders.”

Trump’s attorneys have stated that it goes against the Constitution to impeach or try a former office-holder.

“Virtually everyone agrees that impeachment in our Constitution is designed for those three categories listed in Article 2, Section 4. And that’s the president, the vice president, and civil officers—so people that are still serving in office,” Green said.

He said the concept being pushed currently in the impeachment trial—that if Trump isn’t convicted he will get away with doing “horrible things,” and future presidents will be able to “do whatever they want and get away with it”—is “a total red herring.”

House Democrats, joined by 10 Republicans, voted on Jan. 13 to approve a single article of impeachment (pdf) against Trump for “incitement of insurrection,” making him the first president to be impeached twice. On Feb. 9, he became the first former president to stand trial.

However, Democratic House impeachment managers, led by Rep. Jamie Raskin (D-Md.), in their arguments on Feb. 10, presented no new evidence to support the allegation that Trump incited an insurrection at the U.S. Capitol last month.

Green suggested that in this case, constitutional provisions are being abused in order to “silence” the “opposition.”

“My fear is a separation of powers conflict here that the Senate becomes more and more the judiciary… and now if they can go after someone that’s a citizen like Donald Trump is today, well, they can indict you. They can indict me, they can prevent us from running for future office.

“I know that was not the view of the Founding Fathers. And when you abuse a constitutional provision in one instance, then other people will be able to abuse it in other instances in the future.”

The constitutional attorney accused the Democratic House impeachment managers of stringing elements of the American Constitution together in order to argue that a former president can be impeached.

“I’ve said this throughout this whole process that what they’re doing and pulling together different parts of the Constitution and creating these new rules is more worthy of a banana republic than a constitutional republic,” he said.

Green said language from Article 1, Section 3 of the Constitution was taken, “separated,” and mixed with some of the language in Section 3 of the 14th Amendment, in a way that was both “masterful” and “deceptive.”

“The reason they’re doing that is because on one hand, they want to say he’s the president. On the other hand, they want to say, it doesn’t matter if he’s the president, he did something awful, and we can still impeach. Putting those things together is the way that they’re trying to make their case. It’s when we say political theater,” he explained.

“They took a few kernels of truth—a few phrases out of the Constitution that are obviously there, and even few historical stories. They used those to weave that together to create a fantasy of a situation that has never been done in history—but it feels like it’s accurate and is truth because of the little kernels of truth that were thrown out there. That’s frankly good political theater,” Green said of the impeachment managers in the way that they presented their arguments.

The attorney said that at this point, the United States is living “post-Constitution,” and urged Americans to read the text of the Constitution themselves.

“We’re literally ignoring the constitutional history and the plain text of the Constitution. I think it’s important for us to actually as citizens, to go look at the Constitution ourselves, and not just listen to the silver tongue rhetoric,” he said.

He added: “It’s just like any other trial, you walk into a trial. If trial attorneys are really good, they paint the picture that they want you to believe and I’m afraid they’ve done that in this case, but it is new territory, and it ignores 240 years of history in the United States. And most importantly, it ignores the Constitution itself.”

The Democrats face an uphill battle in convincing enough Republican senators that Trump should be convicted. Forty-four Republicans voted on the first day of the trial that the Senate doesn’t have jurisdiction to try Trump because he’s now a private citizen. Several Republican senators said on Feb. 9 that the vote is an indicator of how the GOP members will ultimately vote on the question of whether the former president is guilty.

Democrats need the votes of at least 17 Republicans in order to secure the supermajority needed to convict Trump. If the vote from the first day of the trial is any indication, the impeachment managers need to change the minds of at least 11 Republicans, a task which even liberal media commentators concede is virtually impossible. 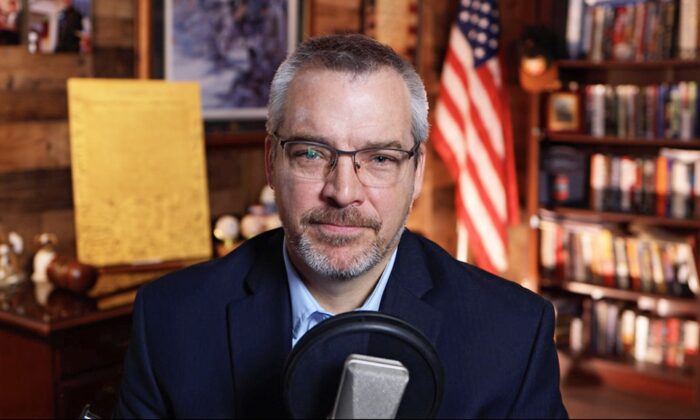