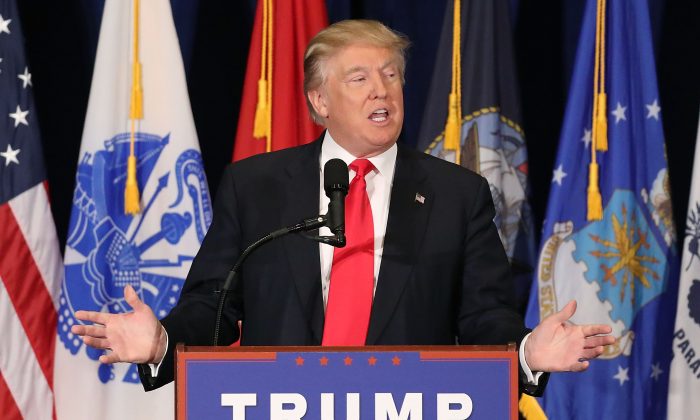 Presumptive Republican Presidential candidate Donald Trump on veteran's issues during a campaign stop July 11, 2016 in Virginia Beach, Virginia. With just a week before the Republican National Convention, Trump has yet to announce a running mate. (Photo by Mark Wilson/Getty Images)
2016 race

Trump: ‘I Am the Law and Order Candidate’

Presumptive Republican nominee Donald Trump spoke in Virginia Beach, Virginia, at a live-streamed event, contrasting himself as the “law and order candidate” to “secretary of the status quo” Hillary Clinton.

Only days after the killing of five police officers and wounding of seven officers at a protest in Dallas, Texas, Trump stressed the importance of police and law and order. The address, which was supposed to have been given on Friday was pushed back due to the shooting.

The shooting of the policemen took place at a Black Lives Matter protest responding to the deaths of two black men by police officers earlier in the week.

Trump has contrasted his “law and order” appeal against Clinton who has faced scrutiny about her ability to handle classified documents after an investigation into her use of a private email server by the FBI.

“We need to clean up the corruption in government and Hillary Clinton will never be able to do it. She’s incompetent and has proven time and time again that she doesn’t have what it takes,” he said.

FBI director James Comey came out last week saying that while Clinton and her staff were grossly negligent in their handling of emails, the FBI does not suggest charges be brought against the candidate.

Trump has repeatedly referred to Clinton as “Crooked Hillary,” and in his speech dedicated a good portion to pointing out the alleged corruption scandals that have followed her around throughout the primary season.

“Crooked Hillary Clinton, sadly, is the secretary of the status quo, and wherever Hillary Clinton goes, corruption and scandal follow. Just look at her life,” he continued.

The speech also outlined a 10-point plan for Veterans Affairs reform, and called for an emergency hotline in the White House monitored by a human for veterans to report complaints, and that he would answer any unanswered complaints personally.