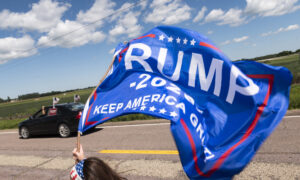 About a dozen Republicans in the House of Representatives met with former President Donald Trump this week, going over the border crisis and how the GOP plans to flip the lower chamber in 2022.

Leaders of the Republican Study Committee, which bills itself as the largest conservative caucus in the House, went to Florida to meet with the former president.

The committee said the meeting included a discussion of “the challenges facing our nation.”

“From securing our border to combatting soaring inflation and the deficit, #RSC is fighting for working families. Thank you President Trump, for developing an agenda that puts Americans first!” it said, sharing photographs of Trump with members.

“It was so great meeting with President Trump last night to discuss a number of conservative priorities. From border security and election integrity to inflation and beyond,” said Rep. Kat Cammack (R-Fla.).

Rep. Jim Banks (R-Ind.), chairman of the committee, told the New York Post that most of the nearly two-hour meeting was about the work the panel is doing to fight for what he described as “the Trump agenda.”

“We talked about our election integrity bill, The Save Democracy Act, which he was very supportive of, and we talked about what we’ve done to define immigration moving forward,” he said.

Republicans flipped 15 House seats, primarily from Democrats, in the 2020 presidential election. The GOP remains in the minority, with an eight-seat deficit, but is confident it can take back control of the chamber in the 2022 midterms, though Democrats believe they’ll retain control.

“We believe we take back the majority by focusing on the Trump agenda, and President Trump plays a big role in that,” Banks said. “He’s obviously planning to go out and hit the road and campaign for candidates who share our vision, and we were excited to talk to him about that.”

“We have arrived at an understanding with a broad unity within the Republican Study Committee and recognizing that the Trump agenda is the winning agenda, we will win back the majority in ’22 and the White House in 2024 so Republicans can run on the Trump agenda,” he added to Breitbart News, explaining that the platform includes tough immigration policies, legislation to rein in Big Tech, and election integrity bills like the Save Democracy Act.

Trump has not publicly commented on the meeting, nor has his spokesman, Jason Miller. But Trump will soon be more visible after largely staying out of the spotlight after leaving the presidency because of how much he opposes the President Joe Biden and House Speaker Nancy Pelosi (D-Calif.) agenda, Banks said.

“He feels like he has a duty to get back out and hold on, hold the rallies, engage with the American people and weigh in on how disastrous the Biden-Pelosi agenda is for our country,” he said. “So I think we’re getting … we’re gonna be seeing a lot more of him. And I think that’s good for Republicans. It’s good for … it’s good for America.”