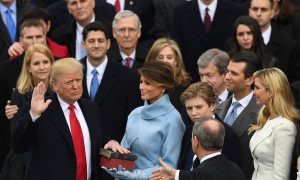 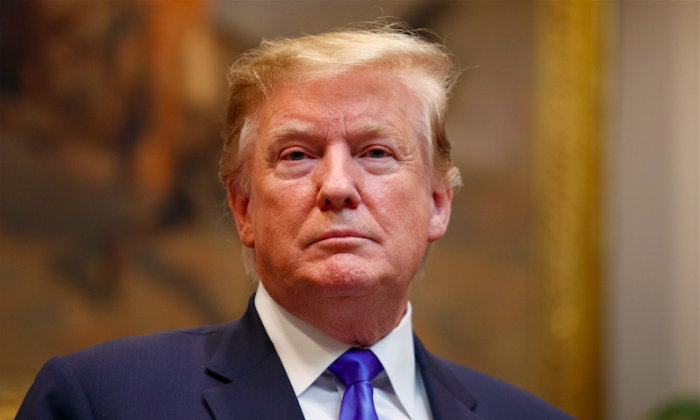 President Donald Trump on Thursday hinted that President Barack Obama was likely aware of the investigations and spying on his campaign during the 2016 elections.

“It is inconceivable when it goes to Clapper, Brennan, Comey, these people, I would imagine that some other people, maybe a little bit higher up also knew about it, and maybe a lot higher up,” Trump said in an interview with Fox News’ Sean Hannity on April 25.

During the 2016 presidential elections, and into the beginning of his presidency, the FBI investigated the Trump campaign based on false information contained in the so-called Steele dossier.

The dossier had been paid for by the Clinton campaign and the DNC and was produced by Fusion GPS and former British intelligence officer Christopher Steele. The final report by Special Counsel Robert Mueller found no evidence for any of the main 103 claims contained in the dossier.

“This was an overthrow and it was a disgraceful thing, I think it is far bigger than Watergate, I think it’s possibly the biggest scandal in political history in this country,” Trump said.

“This was an attempted coup and it’s like a third world country and inconceivable.”

Trump said that following the conclusion of the Mueller probe, which concluded that there was no evidence of collusion between his campaign and Russia, it’s “now time to look at the other side.”

While much information has come out through Congressional testimonies, court documents, text messages, and emails, and other research, about the Spygate scandal, many questions remain about Obama’s involvement in the investigations.

Obama had been provided a summary of the Steele dossier, attached to an intelligence report, during a meeting with Brennan, Comey, and Clapper in January 2017. It is possible he also received the information from Brennan during an August 2017 meeting.

Obama’s National Security Adviser Susan Rice had recalled a Jan. 5, 2017, meeting she had with Obama, Comey, and then-Deputy Attorney General Sally Yates, in the oval office, in a Jan. 20 email to herself.

During the meeting, the investigation into Trump was discussed.

“I can’t imagine a set of parameters or circumstances where the director of the FBI, or the director of intelligence services, would have restrained themselves and not informed the White House,” Marc Ruskin, an adjunct professor at John Jay College of Criminal Justice and a 27-year veteran of the FBI, told The Epoch Times.

In his interview with Hannity, Trump said he hopes that Attorney General William Barr will “do what’s right” in looking into the origins of the investigations.

Barr told Congress earlier this month that he expects Inspector General Michael Horowitz to conclude his investigation into the spying of the Trump campaign by May or June this year.

“The IG report is coming out in three or four weeks and from what I hear is going to be, and should be, and almost has to be a blockbuster because he has access to information that most people don’t,” Trump said.

The President also said that “everything is going to be declassified, and much more,” referring to key documents in the Spygate scandal, such as the FBI’s FD-302 documents, the unredacted Carter Page FISA application, among other documents.