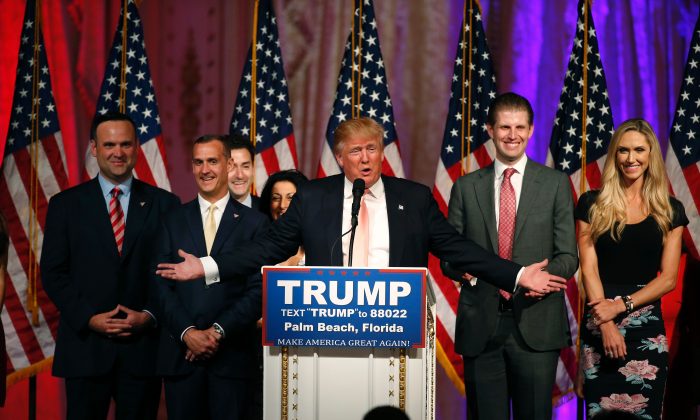 Republican frontrunner Donald Trump is heading to Washington D.C. on March 21 to meet with Republican leadership after a weekend littered with violent protests at rallies in Arizona, Utah, and New York City.

His schedule looks surprisingly conventional and aimed at Washington insiders despite Trump’s unconventional “outsider” campaign. The most surprising aspect includes a meeting with Republican Senator Tom Cotton and other Republican officials at the office of his election lawyer, Donald F. McGahn at the Jones Day Law Firm, according to The New York Times.

The meeting is set to be followed by a press conference at the Trump International Hotel.

The current challenge for Trump is to appear “presidential” to other Republicans.

Trump’s day in the capital is capped with a publicized speech at the American Israel Public Affairs Committee (AIPAC) where he and other presidential nominees, including Hillary Clinton, Ted Cruz, and John Kasich, are speaking to appeal to Israeli-Americans.

Trump’s more conventional schedule would appear to be an attempt to show Republicans that he is a serious candidate willing to meet and work with members of the party. As an outsider to Washington, the current challenge for Trump is to appear “presidential” to other Republicans.

However, as with the rest of the campaign trail, Trump’s presence in Washington has already been preempted with trepidation, criticism, and calls for protest.

The group Come Together Against Hate announced plans to boycott the AIPAC speech with organizer Rabbis David Paskin citing Trump’s encouragement of violence at rallies as reason for the boycott.

Trump’s position on the middle east calls for a neutral stance between Palestine and Israel, a proposed stance that has had criticism on both sides of the aisle.

Democratic frontrunner Hillary Clinton has been taking shots at Trump’s call for neutrality saying to the AIPAC ahead of Trump’s speech Monday:

“We can’t be neutral when rockets rain down on residential neighborhoods, when civilians are stabbed in the street. Some things aren’t negotiable, and anyone who doesn’t understand that has no business being our president.”