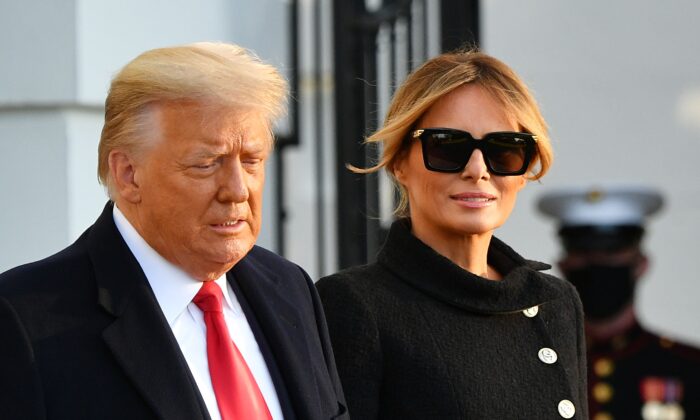 Then-President Donald Trump and First Lady Melania Trump make their way to board Marine One as they depart the White House in Washington on Jan. 20, 2021. (Mandel Ngan/AFP via Getty Images)
Donald Trump

Former President Donald Trump and his wife received COVID-19 vaccines at the White House in January, a source confirmed to The Epoch Times.

Trump and former First Lady Melania Trump both got shots against the CCP (Chinese Communist Party) virus, which causes COVID-19, a source close to the family told The Epoch Times on the condition they not be identified.

It’s not clear whether the Trumps got shots produced by Moderna or Pfizer. Those were the only two authorized vaccines in the United States in January.

Trump, making his first post-presidency speech at the Conservative Political Action Conference in Florida on Sunday, touted the development of vaccines under his administration’s Operation Warp Speed program before noting that President Joe Biden, before entering office, received a shot just before Christmas.

“He got his vaccine. He forgot. It shows you how un-painful that vaccine shot is. So everybody, go get your shot,” he said, referring to how Biden has falsely claimed there was no federal plan to distribute and administer vaccines before he was sworn in.

“By the time I left that magnificent house at 1600 Pennsylvania Avenue, almost 20 million Americans had already been vaccinated. 1.5 million doses were administered on my final day alone. 1.5 million in a day. Yet Biden said just a few days ago that when he got here, meaning The White House, there was no vaccine,” Trump added.

The former president made no mention of himself getting an injection.

Pressed on whether Trump would get a shot late last year, then-Surgeon General Jerome Adams pointed to Trump getting Regeneron’s antibody cocktail during his bout with COVID-19.

“And that is actually one scenario where we tell people maybe you should hold off on getting the vaccine, talk to your health provider to find out the right time,” Adams said.

A number of officials have said even those who have recovered from the new disease should get vaccinated, despite having some level of immunity for a period of time.

Trump “will receive the vaccine as soon as the medical teams determine, but his priority is frontline workers, those in long-term care facilities, and he wants to make sure that the vulnerable get access first,” former White House press secretary Kayleigh McEnany told reporters in Washington in December 2020.