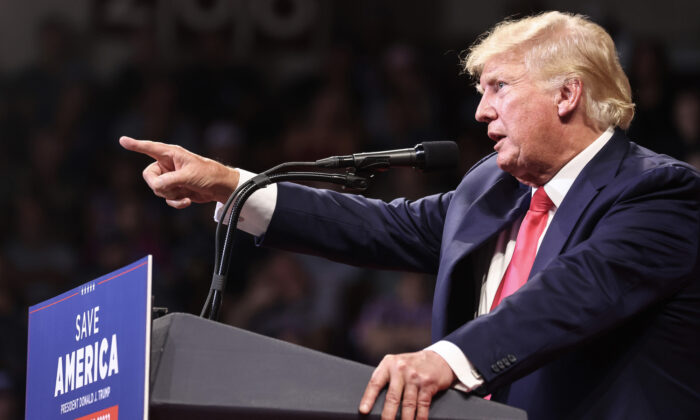 Former President Donald Trump said on late Aug. 8 that his Florida Mar-a-Lago home was “under siege” and “occupied by a group of FBI agents.”

“These are dark times for our Nation, as my beautiful home, Mar-a-Lago in Palm Beach, Florida, is currently under siege, raided, and occupied by a large group of FBI agents,” Trump said in a post on Truth Social.

“After working and cooperating with the relevant Government agencies, this unannounced raid on my home was not necessary or appropriate,” Trump said.

The FBI declined to comment on a press inquiry from The Epoch Times. Its parent agency, the Department of Justice (DOJ), did not respond to a request for comment.

Eric Trump, one of Trump’s sons, said the raid was conducted to see whether his father possessed any documents from his time in office, adding that the former president has been cooperating with the National Archives on the matter for months.

The unprecedented action marks a significant escalation in a records investigation concerning the former president, who is also reportedly facing other Justice Department probes connected to his time before, during, and after holding office. The raid also comes at a time when the former president is gearing up for a widely expected run for president in 2024.

“President Trump and his legal team have been cooperative with FBI and DOJ officials every step of the way. The FBI did conduct an unannounced raid and seized paper,” Bobb said.

In February, Archivist David Ferriero told U.S. House lawmakers that the National Archives and Records Administration had been in communication with Trump throughout 2021 about the return of 15 boxes of records. He eventually returned them in January 2022.

At the time, the National Archives was still conducting an inventory, but noted some of the boxes contained items “marked as classified national security information.”

Trump previously confirmed that he had agreed to return certain records to the Archives, calling it “an ordinary and routine process.” He also said the Archives “did not ‘find’ anything.”

Any search of a private residence would have to be approved by a judge, after the investigating law-enforcement agency demonstrated probable cause that a search was justified.

Trump called the raid “prosecutorial misconduct, the weaponization of the Justice System, and an attack by Radical Left Democrats who desperately don’t want [him] to run for President in 2024, especially based on recent polls,” adding that Democrats “will likewise do anything to stop Republicans and Conservatives in the upcoming Midterm Elections.”

“Nothing like this has ever happened to a President of the United States before,” Trump said.

The former president added: “Such an assault could only take place in broken, Third-World Countries. Sadly, America has now become one of those Countries, corrupt at a level not seen before.”

Republican lawmakers were swift to condemn the raid, accusing Democrats of weaponizing the federal bureaucracy to attack the former president.

“Today’s raid on the former President’s home in the middle of an election season looks like another egregious & unprecedented abuse of power,” the lawmaker said in a statement to The Epoch Times that was later posted on Twitter.

“We will restore order & accountability as soon as we regain the gavels for a Republican majority in November. It can’t happen soon enough!” the congressman added.

Sen. Marco Rubio (R-Fla.) likened the raid to what occurs in socialist dictatorships.

“Using government power to persecute political opponents is something we have seen many times from 3rd world Marxist dictatorships,” Rubio said on Twitter late Monday. “But never before in America.

“After today[‘]s raid on Mar A Lago what do you think the left plans to use those 87,000 new IRS agents for?

“The FBI isn’t doing anything about the groups vandalizing Catholic Churches, firebombing Pro-Life groups or threatening Supreme Court justices. But they find time to raid Mar A Lago,” Rubio said.

Rep. Diana Harshbarger (R-Tenn.) said: “The inconsistent and partisan application of the law by the FBI has gone too far. The Democrats, for too long, have used our government agencies from the FBI to the IRS to target their political opponents. This inconceivable raid is an attack on our Republic.”

Democrats, meanwhile, have defended the raid. House Speaker Nancy Pelosi (D-Calif.) told NBC on Aug. 9, “No person is above the law.”

The White House said on Aug. 9 that it was not informed ahead of time of the FBI raid.

This article was updated to include more information on the raid and the White House’s response.