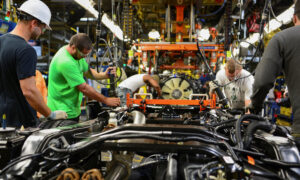 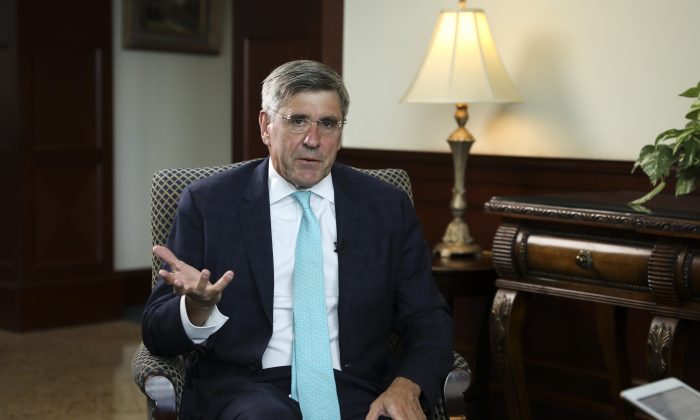 Stephen Moore, distinguished visiting fellow for Project for Economic Growth at The Heritage Foundation in Washington, on May 14, 2019. (Samira Bouaou/The Epoch Times)
Politics

Stephen Moore, an economist and informal adviser to President Donald Trump, on Sept. 20 highlighted recently released census data showing that the U.S. poverty rate declined to the lowest level on record in 2019.

The Census Bureau and Bureau of Labor Statistics (BLS) released a report on Sept. 15 which showed that both the poverty level dropped to 10.5 percent last year, the lowest on record, while the median household income rose to $69,000, the highest on record.

“In 2019, the poverty rate in the United States was lower than it has been at any time since they started measuring it in 1958,” Moore told radio host John Catsimatidis on WABC 770 AM, according to The Hill.

Moore said the progress was due to the Trump administration’s lowering of taxes and ongoing push to slash regulations. Moore laid out the concept in his 2018 book “Trumponomics.”

“Trump has been talking about this, but the media has been yawning about it because they don’t want to report good news,” Moore said. “What this tells us is that Trumponomics—lower taxes, lower regulations, better trade deals, promoting American energy—these policies didn’t just work for the rich.”

The booming economy took a giant blow in the first and second quarters of 2020 due to lockdowns related to the outbreak of the Chinese Communist Party (CCP) virus, commonly known as the coronavirus. The economy has rebounded rapidly since, with the unemployment rate dropping and the job market heating up.

“Since around the middle of May … the economy has done better than anyone expected,” Moore said. “The Congressional Budget Office thought that we would have an unemployment rate at this time of about 14 or 15 percent. In fact, the unemployment rate is only 8.5 percent. We are moving ahead faster than scheduled.

“I don’t think there’s any question that Trump would be far better for markets and for jobs than Biden would.”

Household income increased the most for minority groups in 2019, according to the census data. The increase was the highest for Asians (over 10 percent), followed by blacks (nearly 8 percent), and Hispanics (over 7 percent). Whites saw their income go up nearly 6 percent.

The Census Bureau added two caveats to the data. One, its methodology changed in 2014, so the numbers aren’t quite comparable to 2013 and earlier. Two, the bureau had some trouble getting responses to its survey due to the pandemic, which may have skewed the data. After adjustments, the bureau estimated the median income actually rose to a bit under $67,000, making for about a 4 percent increase from 2018. The number was still the highest on record.