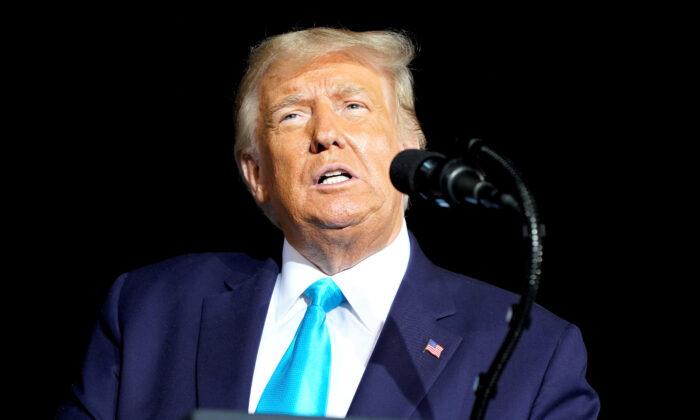 With the May 17 primary five days away, former president Donald Trump urged Republican voters to avoid Barnette and instead back Oz, the candidate he endorsed.

“Kathy Barnette will never be able to win the general election against the radical left Democrats,” Trump said in a statement. “Dr. Oz is the only one who will be able to easily defeat the crazed, lunatic Democrat in Pennsylvania. A vote for anyone else in the primary is a vote against victory in the fall!”

The Democrat Trump referenced is likely Pennsylvania Lt. Gov. John Fetterman, who is expected to win the Democratic nomination on May 17 and face Barnette, McCormick, or Oz in November.

Barnette carries political baggage that will drag her down, Trump said, before adding that he would support her in the future when the current Pennsylvania U.S. Senate race is over.

“She has many things in her past which have not been properly explained or vetted, but if she is able to do so, she will have a wonderful future in the Republican Party—and I will be behind her all the way,” Trump said.

On the same day Trump reinforced his stamp of approval for Oz, former Trump appointee Jack Brewer announced his endorsement of Barnette, criticizing the former president’s backing of Oz.

Brewer, a former NFL safety, served on Trump’s Commission on the Social Status of Black Men and Boys.

In a video message on May 12, Brewer said, “I am here today to endorse Kathy Barnette for U.S. Senate in the state of Pennsylvania.

“As a former Philadelphia Eagle, I understand the issues that are facing so many of the underserved across that state. And I’ll tell you what, Trump got this one wrong.

“Dr. Oz just does not represent American Christian principles that this nation was founded on.”

Brewer defended Barnette against “slanderous media coverage” and cited her U.S. military service as one reason why she is “a real warrior.”

“I know this woman, she’s a principled lady, and we got to get her in D.C.,” Brewer said.

On May 11, Barnette was endorsed by the Susan B. Anthony (SBA) List, an anti-abortion organization.

“Kathy is a courageous advocate for life who exposes the human cost of abortion,” SBA List president Marjorie Dannenfelser said in a statement.

“Her deeply compelling personal story ought to stir consciences across our nation, as she is proof that every child has dignity and deserves a chance and every mother deserves our support to choose life.”

Barnette, who is the author of the book, “Nothing to Lose, Everything to Gain: Being Black and Conservative in America,” has surged in the polls this month.

Race Too Close to Call

Conducted between April 20 and May 1, a Franklin & Marshall College poll showed Oz in first place at 18 percent followed by McCormick with 16 percent and Barnette at 12 percent.

On May 8, The Trafalgar Group released a poll that showed Barnette at 23.2 percent among 1.080 likely GOP primary voters, just behind Oz (24.5 percent) and ahead of McCormick (21.6 percent).

The poll’s margin of error is 2.99 percent, which indicates that the race is too close to call.

According to the survey, 15.1 percent remain undecided.

The current RealClearPolitics overall polling average indicates that Oz owns a 2.3 percent advantage over Barnette, with McCormick in third less than one point behind Barnette.

Since a leaked draft of a U.S. Supreme Court opinion indicated the court’s conservative majority is prepared to overturn the 1973 Roe v. Wade decision that legalized abortion nationwide, abortion has emerged as a hot-button issue in the primary.

Barnette’s personal pro-life story has resonated with voters and powered her rise in the polls, some political pundits believe—a view supported by Dannenfelser’s statement about why the SBA List endorsed the 50-year-old candidate who has run her campaign on a shoestring budget.

Until he entered the U.S. Senate race and secured the Trump endorsement, Oz often conveyed reluctance about laws restricting abortion.

In a 2019 interview that aired on the Breakfast Club radio, Oz said he was “really worried” about the pro-life movement and that reversing Roe v. Wade would have negative effects on women’s health.

“It’s, as a doctor—just putting my doctor hat on—it’s a big-time concern,” Oz said in the interview. “Because I went to medical school in Philadelphia, and I saw women who had coat-hanger events. And I mean really traumatic events that happened when they were younger, before Roe v. Wade. And many of them were harmed for life.”

“If you think that the moment of conception you’ve got a life, then why would you even wait six weeks? Right, then an in-vitro fertilized egg is still a life,” he added.

Oz now insists that he is “strongly pro-life” and that life begins at conception.

Barnette brought up Oz’s pro-choice past in a May 4 debate. She described how she is the “byproduct of a rape.”

‘My Life Has Value’

“It was disturbing when I saw Mehmet Oz running for this race when I have seen him on numerous occasions saying my life was nothing more than an acorn with electrical currents,” Barnette added. “I am wondering if the good doctor has since changed his position on that.”

Saddled with his previous stance on abortion, and his Turkish citizenship, Oz has not seen that bump in support after Trump’s endorsement that J.D. Vance experienced in Ohio, though they were backed by Trump around the same time in April.

McCormick, a hedge fund executive who is also a former U.S. Treasury Dept. official, said that he will be the “conservative leader” Pennsylvania needs and that Oz is not a conservative.

“The problem is Mehmet Oz isn’t popular. And so his endorsed candidate is not getting momentum. The reason is that he’s been liberal, Hollywood liberal, for his entire career, and taken a set of positions that are different than primary voters in Pennsylvania.”

McCormick added that he is a West Point graduate, a combat veteran, a job creator, and “a seventh-generation Pennsylvanian, who grew up in a small town and has a family farm, and as an outsider. And that story, I believe, is selling. And I believe that the people of Pennsylvania are dialing in.”

While Trump’s endorsement catapulted Vance to the top of the polls in the Ohio GOP U.S. Senate primary—a race he won on May 3—the former president’s stamp of approval did not help Charles Herbster in the Nebraska GOP gubernatorial primary on May 10.

Multiple conservative personalities are disparaging Barnette in the midst of her ascent.

This week, Barnette was interviewed by BlazeTV host Steve Deace, who shared a different opinion.

“Going back to my local radio days I’ve exposed plenty of political frauds just with questioning,” Deace said in a tweet.

“She [Barnette] should be vetted like anyone else, but if she’s a fraud like [Sean] Hannity claims, she’s the best I’ve ever seen. She came across as very real and sincere.”

On May 12, Barnette responded on Twitter to the vitriol she has encountered over the past month.

“The fact is that the establishment does not like when regular people rise up and try to run for office,” Barnette wrote.

“They don’t like when people like you and me have the chance to actually make real change. They’re scared and they should be. The status quo is dying.”