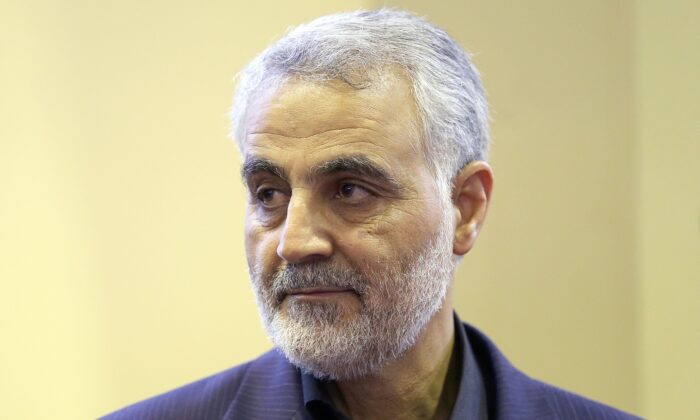 In the Trump era, that patriotic phrase isn’t only dead, it’s decomposed.

And ironically so, since the latest manifestation of this decomposition is over the termination of Qassem Soleimani, the terror mastermind who was, on analysis, even more dangerous to the United States and the world than Osama bin Laden and Abu Bakr al-Baghdadi, monumentally evil as they were.

Neither bin Laden nor al-Baghdadi ever had remotely the power at their disposals—even when the latter controlled his caliphate—that Soleimani did as the military leader of by far the greatest state sponsor of terrorism. They weren’t even close to the man who was head of Iran’s Quds force and the second most powerful person in that country of 80-plus million, with all its attendant weaponry and technology and ties to China and Russia.

Besides the thousands of Americans who either died or were maimed for life because of Soleimani, hundreds of thousands across the Middle East have met their fates at least in part through this man’s ministrations.

The once-shining state of Lebanon is practically decimated through the rise of his Hezbollah, a fate he was replicating in Iraq. And then there’s Yemen and his Houthi and their simultaneous war against Saudi Arabia and their own people. And, of course, Israel, where he kept the Jewish state in a crossfire between his clients Hamas, Islamic Jihad, and, again Hezbollah (when Hezbollah wasn’t busy exporting drugs into the United States).

It’s worth remembering that Soleimani was in charge of all these operations at once, a veritable superstar of terror.

On top of all that, he had as much influence as anyone in keeping the Syrian Civil War alive. Current death (under)count: 400,000. Number of refugees: 5.7 million. He may have changed Europe as we knew it forever.

And let’s not forget Iran itself, where only in the past few weeks, Soleimani’s footprints were all over the deaths of thousands of peaceful anti-regime demonstrators. Nobody knows how many. And torture as well—something that the Islamic Republic has made a specialty since 1979. Only the other day, they again executed a man for homosexuality.

Yet the supposedly liberal and progressive Democrats are all in a dither about the assassination of Soleimani. After all, Trump did it. It has to be wrong.

Not only would these same Democrats obviously have applauded the action if it had been done by one of their own, equally obviously, many of them would have attacked Trump even if had he assassinated Hitler in 1940, blaming the president for escalating the conflict.

It’s that simple—and nauseating—and every honest person in America knows it, especially the vets, almost all of whom have friends incinerated by one of Soleimani’s roadside bombs, if they aren’t themselves walking around on prosthetic devices.

And this leaves aside whatever Soleimani’s plans were that constituted the proximate cause of the assassination. If past performance is any indication, he had many.

Meanwhile, the Democratic candidates are demonstrating uniform cowardice in the face of the action. Is there one of them you would want to have beside you in a foxhole?

It would seem to have been impossible, but as bad as it’s been for the past three years, Trump Derangement Syndrome has reached unforeseen levels.

But a deeper cause of this increased derangement may stem from events that began Sept. 11, 2012—the Obama administration’s behavior in the aftermath of the deaths of four Americans in Benghazi, Libya.

As most will recall, the administration sent Susan Rice to inform the nation that the lethal terror attack occurred because of a spontaneous emotional reaction to an amateur anti-Islamic video that barely anyone had ever watched. It wasn’t a planned attack by a terror group, Rice said. That was a despicable lie.

Kenneth Timmerman wrote in the New York Post in June 2014, “My sources, meanwhile, say Suleymani [sic] was involved in an even more direct attack on the U.S.—the killing of Ambassador Christopher Stevens in Benghazi, Libya.”

Timmerman goes on to detail a complicated and clever plot behind Benghazi worthy of the evil mastermind Soleimani. (Read it here.)

If this is true—and it seems vastly more likely than Rice’s “explanation”—then what just occurred at Baghdad Airport is a prime, and highly justified, example of that old saw: what goes around comes around.