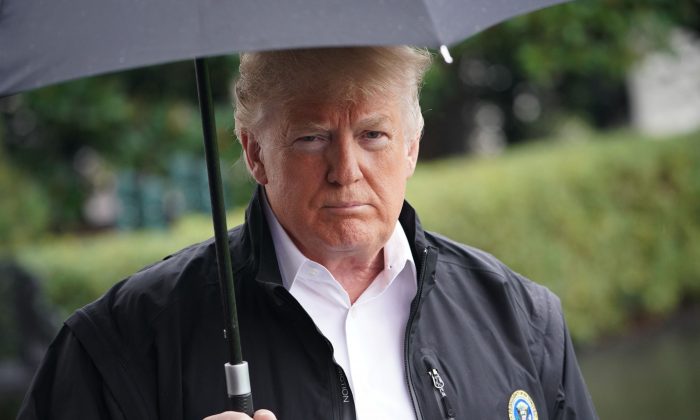 President Donald Trump speaks before boarding Marine One from the South Lawn of the White House in Washington, DC on Oct. 15, 2018. (MANDEL NGAN/AFP/Getty Images)
Trump Administration

It seems no stone was left unturned in an all-encompassing interview on CBS’ “60 Minutes” with President Donald Trump, from defending his administration’s policies against Russia and North Korea to Saudi Arabia’s missing journalist case.

In the Oct. 14 segment that included some testy exchanges, network reporter Lesley Stahl sat down with Trump for her third such interview with him. Trump was a presidential candidate during their first interview. He was president-elect during the second.

“In terms of the three interviews, he was completely different,” Stahl said, in describing her experience. “He’s so much more confident. He is truly president. And you felt it. I felt it in this interview.”

Trump told Stahl he is tougher on Russia than former President Barack Obama. At one point, he said his predecessor only sent Ukraine “pillows and blankets” in reference to the 2014 Russian military intervention.

“I’m the one that gave Ukraine offensive weapons and tank killers. Obama didn’t. You know what he sent? He sent pillows and blankets,” Trump said.

He also defended his relationship with Russian President Vladimir Putin, “I think I’m very tough with him personally.”

Around the middle point of the segment, Stahl pressed Trump on whether he would “pledge” not to fire special counsel Robert Mueller, who, for more than a year, has headed a probe into allegations of collusion between the Trump presidential campaign and Russia to influence the 2016 election.

“I don’t pledge anything,” Trump said. “But I will tell you, I have no intention of doing that. I think it’s a very unfair investigation because there was no collusion of any kind.”

When pressed further on the issue, Trump responded, “Why should I pledge to you? If I pledge, I’ll pledge. I don’t have to pledge to you.”

The segment also touched upon Trump’s relationship with North Korean leader Kim Jong Un. The president described the progress with Pyongyang as a “great achievement” so far, adding that he trusts Kim at the moment, but that he could be wrong.

On denuclearizing the country Trump admitted it’s unclear whether the communist regime is still building missiles. He emphasized that he would not be easing sanctions against them, although Kim has asked him to.

Stahl questioned Trump’s friendly relationship with Kim, likening it to an “embrace.” The president argued that his diplomacy style has reduced the regime’s threat.

“I get along with him really well. I have a good energy with him” Trump said. “Look at the horrible threats that were made. No more threats.”

On the mysterious disappearance of Saudi Arabian journalist Jamal Khashoggi, Trump said that if it turns out the Saudis are responsible for the alleged murder, there would be “severe punishment.” He stressed that at the moment no one is clear what really happened to the Washington Post contributor.

Trump said his son-in-law, Jared Kushner, had called Saudi Crown Prince Mohammed bin Salman, who denied any involvement in the disappearance of Khashoggi.

“It’s being investigated,” Trump said. “It’s being looked at very, very strongly. And we would be very upset and angry if that were the case. As of this moment, they deny it.”

The president said he was highly tentative about potentially having to issue economic sanctions against Saudi Arabia, saying he doesn’t want to hurt American jobs over unverified claims.

“I tell you what I don’t wanna do. Boeing, Lockheed, Raytheon, all these [companies]—I don’t want to hurt jobs,” he said. “I don’t want to lose an order like that. There are other ways of punishing, to use a word—that’s a pretty harsh word, but it’s true.”

With regard to China, the president said that there “might” be more tariffs in the future, before saying that he doesn’t want to push the Chinese economy into depression. The Trump administration has already imposed $250 billion in tariffs on the Bejing regime.

“I want them to negotiate a fair deal with us. I want them to open their markets, like … our markets are open,” he said. “We cannot continue to have China take $500 billion a year out of the United States in the form of trade and others things.”