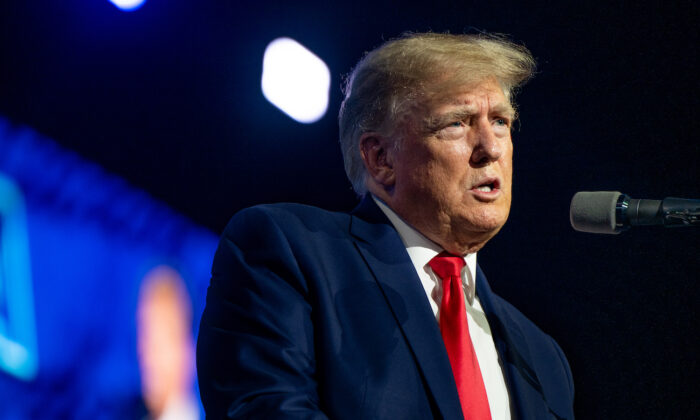 Former President Donald Trump on Friday called for a “top to bottom security overhaul” at schools nationwide after 21 people died at a mass shooting in Texas earlier this week.

Trump condemned the May 24 shooting at Robb Elementary School in Uvalde, calling it a “heinous massacre” and a “savage and barbaric atrocity that shocks the conscience of every single American.”

He called for a brief moment of silence while he read out the names of all 21 victims who perished that day.

“The monster who committed this crime is pure evil, pure cruelty, pure hatred. Absolute pure hatred,” Trump said. “While those he slaughtered are now with God in heaven, he will be eternally damned to burn in the fires of hell.”

“Every time a disturbed or demented person commits such a hideous crime, there’s always a grotesque effort by some in our society to use the suffering of others to advance their own extreme political agenda,” he said. “Even more repulsive is their rush to shift blame away from the villains who commit acts of mass violence and to place that blame onto the shoulders of millions of peaceful, law-abiding citizens who belong to organizations such as our wonderful NRA.”

He added, “As always in the wake of these tragedies, the various gun control policies being pushed by the left would have done nothing to prevent the horrors that took place. Absolutely nothing.”

Trump called for a “top to bottom security overhaul” at schools across the nation to protect students and teachers.

“Every building should have a single point of entry. There should be strong exterior fencing, metal detectors, and the use of new technology to make sure no unauthorized individual can ever enter the school with a weapon,” he said.

“No one should ever be able to get anywhere near a classroom until they have been checked, scanned, screened, and fully approved. It is so important.

“In addition, classroom doors should be hardened to make them lockable from the inside and closed to intruders from the outside. And above all, every school in America should have a police officer or an armed resource officer on duty at all times.”

The former president also said that as part of a comprehensive school safety plan, teachers who are highly trained in using firearms should be able to “safely and discreetly conceal carry.”

He dismissed the idea of a gun-free zone. “There is no sign more inviting to a mass killer than a sign that declares a gun-free zone. … Statistically, it is a total disaster. Gun-free zone—they look at the sign and say ‘that is where I am going.'”

“What on earth is stopping democrats from immediately passing measures to ramp up school security?” Trump asked.

Trump said that the shooting reflects complicated issues facing the nation, including that of mental health. He encouraged people in the community to “say something” when they see anything of concern on social media or at school.

“There are always so many warning signs. Almost all of these disfigured minds share the same profile. … Teachers, parents, school officials need to be recognizing and addressing these alarm bells promptly and very aggressively,” Trump said. “Our school discipline systems, instead of making excuses and turning a blind eye, need to confront bad behavior quickly.”

Trump spoke in support of arming law-abiding citizens with guns to protect against danger while accusing Democrat politicians at large of wanting to confiscate guns from everyone.

“Let’s not pretend that those on the left are talking about just limiting one class of gun or one category of ammunition. We all know they want total gun confiscation,” he said.

“This would be a first step. Once they get the first step, they’ll take the second step, the third, the fourth, and then you’ll have a whole different look at the Second Amendment, which is totally under siege,” he said.

“But even if every decent and honest American gave up their guns, the criminals would never give up theirs, and they never will. They would wreak havoc like never before in our country,” Trump said. “The fact is that there will always be sick and demonic souls who wish to harm the innocent and wish to see malice triumph over good.”

Trump said that the NRA’s thousands of certified firearms instructors each year “train one million Americans to be safer gun owners, ready to act when the situation calls.”

“Every day, that training is protecting the vulnerable and safeguarding the innocent,” Trump said, adding later, “As the age-old saying goes, the only way to stop a bad guy with the gun is a good guy with the gun.”

‘It Took Too Long’

Trump said the response to take down the shooter, Salvador Ramos, was too long. He called for further training in all police departments across the nation.

“At every police department in America, we need rigorous training on active shooter protocols to immediately locate and eliminate the target. It took too long,” Trump said, referring to the response to take down Ramos.

The former president reiterated his support for increasing funding for police.

“We need to expand funding, recruiting, and training for police departments nationwide. This is not a matter of money, this is a matter of will,” he said.

“We will no longer defund the police and we will no longer mention it. Great American heroes. If allowed to do their job, they will do it like nobody else can. All of those crime statistics will be cut in such a big way, you will be so proud to be an American,” he told the crowd.

“If America had a proper approach to policing and jailing, we could cut violent crime in our major cities by much more than half and it would take place almost immediately,” Trump said, adding later, “The most straightforward thing we can do to save lives from violence is to hire more police, arrest more violent criminals and get them into jail.”