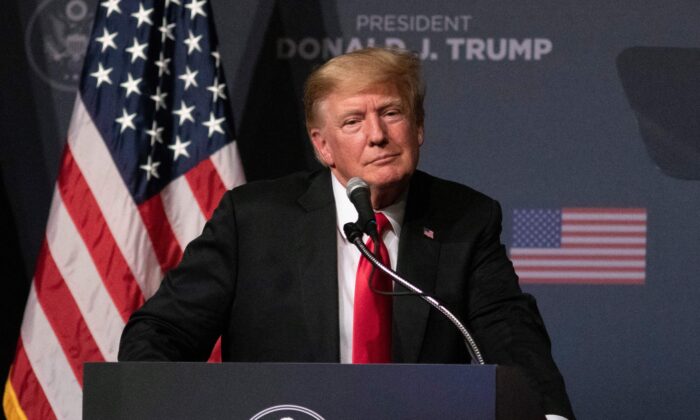 Former President Donald Trump criticized the Pulitzer Prize Board on July 18 for refusing to rescind the 2018 awards given to The New York Times and The Washington Post for their coverage of the now-debunked counter-intelligence story of alleged collusion between the Trump campaign and Russia.

“The Pulitzer Board has taken away any shred of credibility it had left with its ‘response’ regarding the 2018 Pulitzer Prize for National Reporting, which was awarded to The New York Times and The Washington Post for blatant fake news,” Trump said in a statement released on Monday.

“Instead of acting with integrity and providing transparency, the Pulitzer Board is running cover for the biggest reporting failure in modern history: the fake Russia Russia Russia collusion hoax,” Trump added.

In 2018, the board handed the two outlets its National Reporting prizes for “deeply sourced, relentlessly reported coverage in the public interest that dramatically furthered the nation’s understanding of Russian interference in the 2016 presidential election.”

Trump formally asked the board to withdraw the prizes in October 2021, when he sent a letter to Bud Kliment, who was then-interim administrator of the awards. In his letter, Trump said the coverage was based on “false reporting of a non-existent link between the Kremlin and the Trump Campaign.”

The former president pointed to the indictment of Michael Sussmann, the former attorney for Hilary Clinton’s 2016 presidential campaign, who was charged last year with making false statements to the FBI.

In May, Trump sent another letter to the board, asking its administrator Marjorie Miller to rescind the prizes. If not, Trump wrote that “we will see you in court.”

On July 18, the Pulitzer Prize Board said it found no reason to withdraw the prizes following two independent reviews, after inquiries from those including Trump.

“The separate reviews converged in their conclusions: that no passages or headlines, contentions or assertions in any of the winning submissions were discredited by facts that emerged subsequent to the conferral of the prizes,” the board wrote in a statement.

The board said the reviews were “conducted by individuals with no connection to the institutions whose work was under examination, nor any connection to each other,” without giving names of anyone involved in the reviewing process.

“The 2018 Pulitzer Prizes in National Reporting stand,” the board concluded.

Trump suggested that the only Pulitzer the two outlets should be given was if the board decided to create a new category called “disinformation.”

“The truth is that the 2018 Pulitzer Prize was handed out for reporting that merely parroted political disinformation—disinformation that we know was fabricated by foreign operatives and my political opponents,” Trump said.

He added, “If the Pulitzer Prize has become a blatant acknowledgement of false, liberal political propaganda, then the Pulitzer Board should just say so.”

Trump concluded his statement by saying that he would “continue doing everything possible to right the wrong caused by the 2018 Pulitzer Prize,” before adding that he would do the same with the Jan. 6 committee.

“It is a witch-hunt of the highest level, the likes of which has never been seen in our country before,” Trump wrote.