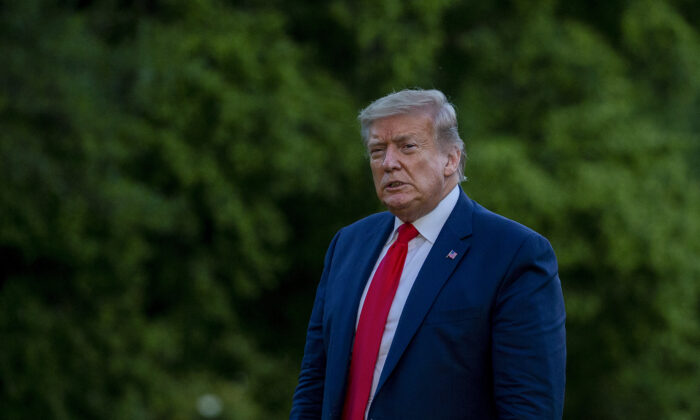 President Donald Trump walks off Marine One in Washington on May 30, 2020. (Tasos Katopodis/Getty Images)
US News

He then said that Biden, if elected, would also “defund our military” because “he has no choice” as the Democrats are allegedly “controlled by the radical left.”

Following the death of Floyd, the Minneapolis man who died while in police custody after an officer kneeled on his neck, organizers of Black Lives Matter stated they want “a national defunding of police.” Some Democrats echoed the statement.

Biden, who has been supportive of demonstrators, has not called for defunding police departments. In an opinion piece written for the Los Angeles Times, the former vice president said additional police oversight is needed.

“If elected, I am committed to establishing a national police oversight commission within 100 days of taking office,” Biden wrote. “We need to implement real community policing and ensure that every police department in the country undertakes a comprehensive review of their hiring, their training, and their de-escalation practices, with the federal government providing the tools and resources needed to implement reforms.”

Several city council members in Minneapolis have said they will disband the Minneapolis Police Department.

“And when we’re done, we’re not simply gonna glue it back together. We are going to dramatically rethink how we approach public safety and emergency response. It’s really past due,” said city council member Jeremiah Ellison, who recently professed his support for the far-left militant group Antifa. He is also the son of Minnesota Attorney General Keith Ellison.

The Democratic Socialists of America have also called for defunding the police.

“We demand a People’s Budget that accounts for the structural iniquities inscribed in our city’s operations and enforced by HPD,” the Houston wing of the organization wrote on Twitter.

But some police officials said the idea to defund or even abolish police departments is an absurd one.

“I mean, so we talk about defunding, and then there’s talk about dismantling in some instances, it’s clearly a knee-jerk reaction—this notion that one-size-fits-all, it’s flawed,” Detroit Police Chief James Craig, who is black, told Fox News. “I mean how does that go with ensuring that police departments are providing effective and efficient policing to the community they’re serving? It just makes no sense. Now, I acknowledge that and certainly in challenging communities that we should pay attention to recreation in schools but we don’t do it by defunding the police,” he added.