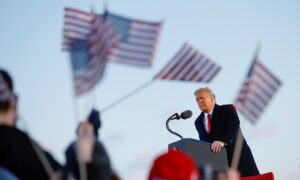 Trump Leaves Washington, Tells Supporters: 'We Will Be Back in Some Form'
0
Share Now
TelegramFacebookTweetEmailTellMeWeReddit
Copy Link 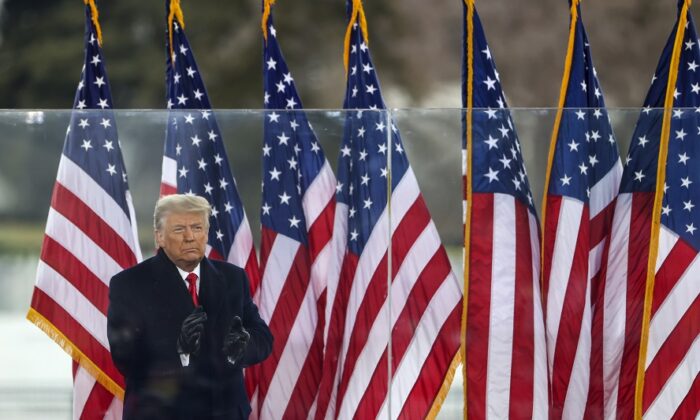 President Donald Trump greets the crowd at the "Stop The Steal" rally in Washington on Jan. 6, 2021. (Tasos Katopodis/Getty Images)
Politics

Trump Creates ‘Office of the Former President’ to Advance US Interests, Carry on Trump Admin Agenda

Former President Donald Trump opened an “Office of the Former President” on Jan. 25 that seeks to advance the interests of the United States and carry on the agenda of his administration.

A statement from the office in Palm Beach County, Florida, reads: “Today, the 45th President of the United States, Donald J. Trump, formally opened the Office of the Former President.

“The Office will be responsible for managing President Trump’s correspondence, public statements, appearances, and official activities to advance the interests of the United States and to carry on the agenda of the Trump Administration through advocacy, organizing, and public activism.

“President Trump will always and forever be a champion for the American People.”

There have been many questions as to whether or how Trump would engage in politics after he left office. Trump made his first political move after leaving the White House on Jan. 22 when in a phone call he endorsed Kelli Ward, who was later reelected as the Arizona Republican Party Chairwoman.

It is such an honor to have President Donald Trump’s total & complete endorsement as I run for re-election as @AZGOP Chairwoman! 🇺🇸#Humbled #Blessed #AmericaFirst pic.twitter.com/y8U2ZcepjL

The announcement of the “Office of the Former President’ came shortly before the House of Representatives delivered a single impeachment charge to the Senate late Jan. 25. The “incitement of insurrection” charge claims that Trump was responsible for inciting an insurrection that resulted in riots at the U.S. Capitol on Jan. 6.

Although Trump left office on Jan. 20, Senate leaders are determined to press forward. If convicted, senators can then choose to disqualify the former president from ever holding office again.

Some Democrats are also looking at using the Constitution’s 14th Amendment to bar him from holding office.

Trump later made remarks in a similar vein, saying that he’ll make a comeback in some way. “We’ll do something, but not just yet,” Trump told Rob Crilly of the Washington Examiner on Jan. 22, without elaborating.

Former U.S. Ambassador to Germany Richard Grenell said over the weekend that Trump had told him that he wants to run for the presidency again. Grenell told Newsmax: “He’s told me personally, multiple times, that he does want to run again. So we’ll see if that holds and how that comes about; I think we’ve got a long ways to go.”

Jason Miller, a campaign adviser, said earlier this month that Trump would be involved in the 2022 midterms with the immediate focus being to help Republicans win back both chambers of Congress. It’s unclear whether he would run for president in 2024.

Miller also told The Epoch Times on Jan. 25 that Trump and his team don’t have any affiliation with a newly formed political committee called the MAGA Patriot Party, amid speculation that Trump would try to form a third party.