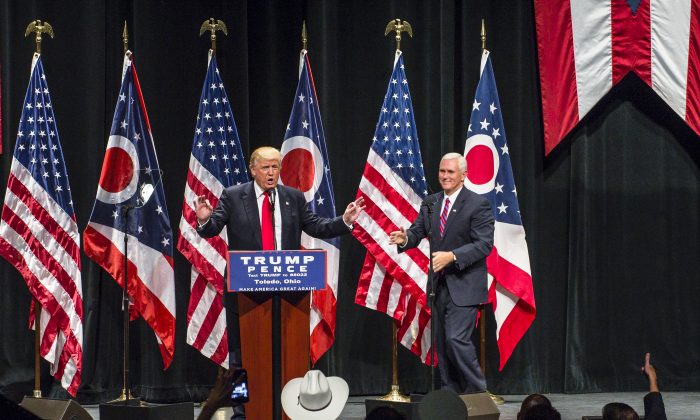 The chair of Trump’s campaign in Mahoning County, Ohio resigned on Thursday following racially charged remarks in an interview with The Guardian’s “Anywhere but Washington” series.

Kathy Miller, in the interview, said that there had been “no racism” before President Obama took office and that it’s the fault of black Americans if they haven’t made it in the last half-century.

“If you’re black and you haven’t been successful in the last 50 years, it’s your own fault. You’ve had every opportunity, it was given to you,” Miller told The Guardian.

“You’ve had the same schools everybody else went to,” she continued. “You had benefits to go to college that white kids didn’t have. You had all the advantages and didn’t take advantage of it. It’s not our fault, certainly.”

Ohio Trump campaign chair Kathy Miller: “There was no racism before Obama got elected…”https://t.co/SxITbW9JAZ pic.twitter.com/yQus7lz9VY

She also referred to Black Lives Matter as a “stupid waste of time” and suggested lower voter turnout among blacks has to do with “the way they were raised.”

The interview was published Thursday morning, and by noon, Miller had resigned her post as chair of the county and resigned from her spot as an elector to the Electoral College, saying “my personal comments were inappropriate, and I apologize.”

“Our county chairs are volunteers who signed up to help organize grassroots outreach like door-knocking and phone calls, they are not spokespeople for the campaign. I have accepted Kathy Miller’s resignation as the Mahoning County chair in light of these inappropriate comments,” read a statement by the Ohio Trump campaign.

With Miller’s resignation, treasurer of the Ohio GOP Tracey Winbush became the Mahoning County chair for Donald Trump’s campaign. Winbush had previously been critical of Trump and his approach to race.

“The ticket is already set and we can’t go back to the primary and erase it,” she said referring to Trump in a video in April.

“But there are those of you in here that are supporting a man who, at the top of the ticket, who has denigrated the Republican Party like I’ve never seen before,” Winbush continued. “Clarence Mingo and I were offended as African-Americans by some of the comments and some of the tactics that that man has taken.”

However, following her promotion to the county chair, she deleted all of her previous tweets. Her accounts still shows that she had over twelve thousand tweets.

In place of the deleted tweets she posted a new tweet saying “Hello Twitter! #myfirstTweet” followed by “I look forward to serving the Mahoning Valley For @realDonaldTrump Campaign. What a blessing.”

Twitter users quickly pointed out the missing tweets and her previous comments about Trump. “He is not a racist liar; The media and the Progressive Movement dont want voters to hear his message,” Winbush wrote on Twitter in response.