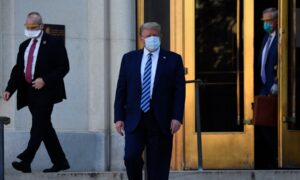 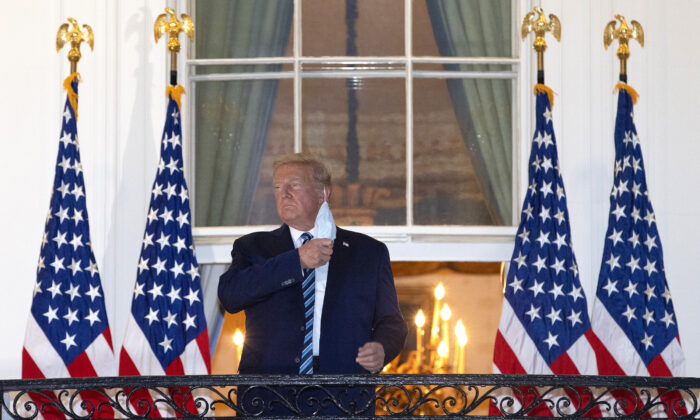 President Donald Trump’s doctor said the president had a “restful first night at home” after he returned to the White House on Monday, days after being diagnosed with COVID-19.

The president’s vital signs and his physical examination remain stable, and his “ambulatory oxygen saturation level” is 95 to 97 percent.

“Overall, he continues to do extremely well,” Conley said in a statement released by White House press secretary Kayleigh McEnany. “I will provide updates as we know more.”

After he arrived at the White House from Marine One on Monday, the president walked out onto the Truman Balcony, removed his mask, and saluted military officers. Critics said the president was being irresponsible.

However, a spokesperson said Trump was projecting strength.

“At times like this, in these moments, it is highly important for the commander in chief to express confidence to our domestic population, and it is very important, to our allies and adversaries,” White House Communications Director Alyssa Farah told Fox News on Tuesday, adding that Trump is “projecting an image of strength.”

Farah said that Americans “needed to see their president strong and leading” during the CCP (Chinese Communist Party) virus pandemic.

The president, on Oct. 2, at around 1 a.m., announced that he and First Lady Melania Trump contracted the virus after White House adviser Hope Hicks tested positive. The president then spent several days at Walter Reed hospital in Maryland.

Conley and other doctors, in an update on Sunday, said Trump received oxygen after his blood oxygen levels dropped on Friday, adding that he had a fever. But starting on Sunday, his medical team said Trump responded well to treatment and is seeing his health improve.

On Tuesday morning, amid speculation, Trump announced he would debate Democratic nominee Joe Biden on Oct. 15.

“I am looking forward to the debate on the evening of Thursday, October 15th in Miami. It will be great!” he wrote on Twitter. Seconds before that, Trump wrote on the website: “FEELING GREAT!”

In a video on Monday, Trump stated that his administration is “going back to work.”

We’re gonna be out front. As your leader I had to do that. I knew there’s danger to it but I had to do it,” Trump said in the video from the White House. “I stood out front. I led. Nobody that’s a leader would not do what I did. I know there’s a risk, there’s a danger,” Trump added.