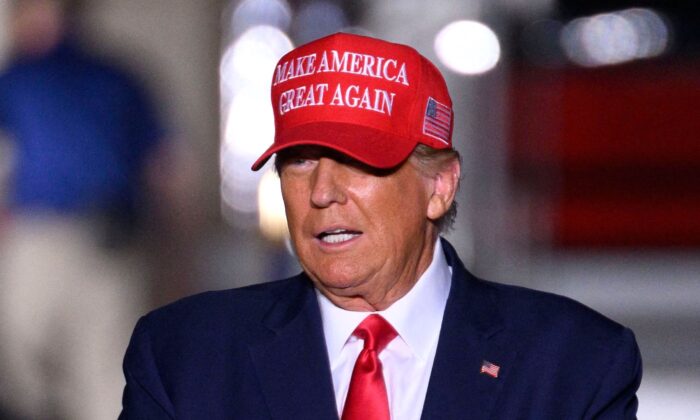 Former President Donald Trump arrives for a "Save America" rally ahead of the midterm elections at Arnold Palmer Regional Airport in Latrobe, Pa., on Nov. 5, 2022. (Angela Weiss/AFP via Getty Images)
By Tom Ozimek

Former President Donald Trump said during a rally in Ohio on Monday that his administration “waged war” against cartels and illegal immigration while arguing that President Joe Biden’s leadership threatens to drag the United States into World War III.

At the Nov. 7 rally in Dayton, Trump sought to strike a contrast between policies under his administration and those of his successor in the White House.

“The choice this election is simple. Democrats will defund the police, Republicans will defund the cartels,” Trump said a day before polls opened on Election Day, drawing cheers from the crowd.

The former president then spoke about his administration’s fight to stem the flow of illegal immigration into the United States and fight drug trafficking.

“Under my leadership, we waged wars on the cartels, we ended catch-and-release, we stopped asylum fraud, and we threw illegal aliens and gang members out of the country by the thousands,” Trump continued.

Trump then accused Biden of misplaced priorities by expanding the reach of the Internal Revenue Service (IRS) rather than focusing on border security.

Expanding on the issue of security, Trump touted his efforts to reduce the threat of nuclear war by meeting with North Korea’s leader Kim Jong-un.

“You would’ve ended up in a nuclear war at that time,” Trump said.

“You could end up in another one, a different one with him and also Russia and also others because our people don’t know what the hell they’re doing,” Trump said, accusing the Biden administration of a number of “unforced” policy errors, including fueling inflation through government spending.

With tensions running high amid Russia’s invasion of Ukraine, Biden warned in early October that the risk of nuclear “Armageddon” was the highest since the Cuban Missile Crisis.

Russian President Vladimir Putin in late September warned that if the territorial integrity of his country was threatened, Moscow would “use all the means at our disposal to protect Russia and our people,” adding that he’s “not bluffing.”

Biden later said he knows Putin “fairly well” and that he’s convinced the Russian leader was “not joking when he talks about potential use of tactical nuclear weapons.”

The president added that he didn’t think there was a way for Russia to use a tactical nuclear strike on the battlefield without triggering a global catastrophe.

“I don’t think there’s any such thing as the ability to easily [use] a tactical nuclear weapon and not end up with Armageddon,” Biden said.

During the rally, Trump accused Biden of “casually talking about nuclear war with Russia, which would be World War III.”

Trump said a world war with the use of nuclear weapons would be “far more devastating” than any of the prior world wars because today’s weapons are considerably more powerful.

It’s not the first time Trump has warned of the potential for a nuclear conflict.

During an appearance on a radio talk show in late September, the former president said his biggest worry was that America could end up in World War III.

The Epoch Times has reached out to the White House for comment on Trump’s remarks.