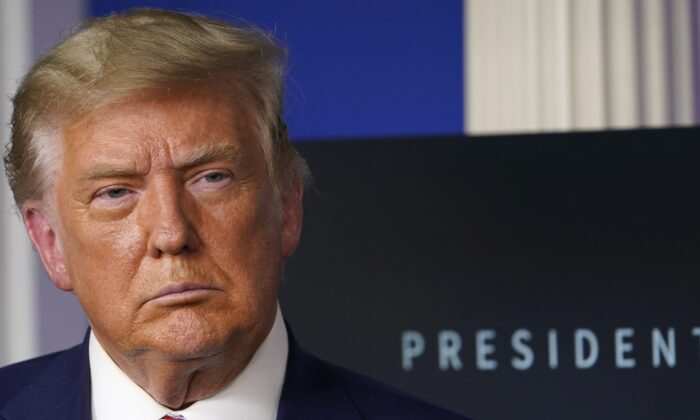 President Donald Trump listens during an event in the briefing room of the White House on Nov. 25, 2020. (Susan Walsh/AP Photo)
Trump Administration

President Donald Trump said that he will veto the defense bill that passed with bipartisan support in Congress last week.

“THE BIGGEST WINNER OF OUR NEW DEFENSE BILL IS CHINA!. I WILL VETO!” the president declared on Twitter on Dec. 13.

The Senate on Dec. 11 passed the National Defense Authorization Act (NDAA) in an 84–13 vote, after the president said he would veto the measure. The House had earlier approved the bill by a 335–78 vote.

“I hope House Republicans will vote against the very weak National Defense Authorization Act (NDAA), which I will VETO,” the president wrote on Dec. 8. “Must include a termination of Section 230 (for National Security purposes), preserve our National Monuments, & allow for 5G & troop reductions in foreign lands!”

For months, the president has railed against Section 230, a federal law that provides blanket liability protections for social media and tech companies. Trump and Republicans have said the bill allows those companies to essentially make discretionary choices about what content should be allowed, adding that the companies have unfairly targeted conservatives.

The NDAA bill also doesn’t support Trump’s efforts to draw down troops in Afghanistan and Germany.

Sen. Richard Shelby (R-Ala.) said, “This legislation is a vital step in the process of funding America’s defense to provide protection for our country and care for our troops.”

Senate Majority Leader Mitch McConnell (R-Ky.) said the bill will “keep our forces ready to deter China and stand strong in the Indo-Pacific,” and provides “more than $740 billion for the training, tools, and cutting-edge equipment that our service members and civilian employees need to defend American lives and American interests.”

One of those who voted against the measure, Sen. Rand Paul (R-Ky.), said he doesn’t support a bill that limits Trump’s actions in drawing down troops from Germany and Afghanistan.

Should Trump veto the bill, some lawmakers said they believe they will be able to override it.

“I think we can override the veto, if in fact he vetoes,” House Majority Leader Steny Hoyer (D-Md.) said on Dec. 8. “I hope he does not veto, I hope he reconsiders. And I think he will get substantial pressure, advice (from Republicans) that, you know, you don’t want to put the defense bill at risk.”