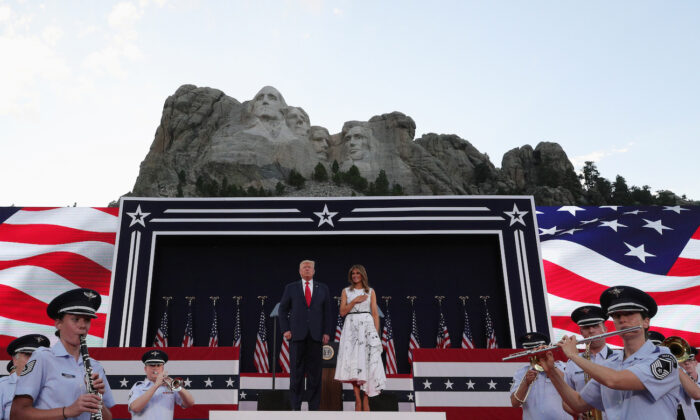 In a speech at Mount Rushmore on the eve of July 4, President Donald Trump celebrated America’s heritage and echoed the values, ideals, and freedoms enshrined in the Declaration of Independence, while calling on patriots to stand up to “cancel culture” and what he called “a new far-left fascism.”

“There could be no better place to celebrate America’s independence than beneath this magnificent, incredible, majestic mountain and monument to the greatest Americans who ever lived,” the president said on Friday in his speech, following a military flyover.

Celebratory Fourth of July fireworks were being held over the famed landmark for the first time in 11 years.

Trump celebrated the courage of the Founding Fathers who declared America’s independence on July 4, 1776 and cheered on the “revolution in the pursuit of justice, equality, liberty, and prosperity.”

“Our Founders boldly declared that we are all endowed with the same divine rights given us by our creator in heaven, and that which God has given us we will allow no one ever to take away, ever,” the Republican president said, to applause.

“Yet as we meet here tonight, there is a growing danger that threatens every blessing our ancestors fought so hard for—struggled, they bled to secure,” he continued. “Our nation is witnessing a merciless campaign to wipe out our history, defame our heroes, erase our values, and indoctrinate our children.

“Angry mobs are trying to tear down statues of our Founders, deface our most sacred memorials, and unleash a wave of violent crime in our cities,” he added. “Many of these people have no idea why they are doing this, but some know exactly what they are doing.”

The president announced that federal agents on Thursday arrested the suspected ringleader behind the attack on the statue of Andrew Jackson near the White House back in late June. He also announced an executive order to create a new national park featuring statues of great Americans.

A “left-wing cultural revolution” is currently seeking to overthrow Americans’ freedoms, Trump told the crowd, calling out “cancel culture” as being one of the political weapons employed by those who seek a revolution.

Such a culture plays out in the form of “driving people from their jobs, shaming dissenters, and demanding total submission from anyone who disagrees,” Trump said.

“This is the very definition of totalitarianism, and it is completely alien to our culture and to our values, and it has absolutely no place in the United States of America,” the president asserted.

He referred to the force behind this culture as a “new far-left fascism” that “demands absolute allegiance” in schools, newsrooms, and corporate boardrooms across the nation.

“If you do not speak its language, perform its rituals, recite its mantras, and follow its commandments then you will be censored, banished, blacklisted, persecuted, and punished. It’s not going to happen to us,” Trump continued.

Part of the radical assault, Trump pointed out, includes the tearing down of “every statue, symbol, and memory” of America’s heritage.

“The violent mayhem we have seen in the streets and cities that are run by liberal democrats in every case, is the predictable result of years of extreme indoctrination and bias in education, journalism, and other cultural institutions,” Trump contended. “Against every law of society and nature, our children are taught in school to hate their own country and to believe that the men and women who built it were not heroes but villains.”

“The radical view of American history is a web of lies. All perspective is removed. Every virtue is obscured. Every motive is twisted. Every fact is distorted. And every flaw is magnified until the history is purged and the record is disfigured beyond all recognition,” he added.

Trump alleged the radical movement had “defiled” the memory of the U.S. presidents depicted at Mount Rushmore. He sought to celebrate their memory by detailing in his speech the heroic deeds they performed that brought freedom to the country.

“The radical ideology attacking our country advances under the banner of ‘social justice.’ But in truth, it would demolish both justice and society,” Trump said. “It would transform justice into an instrument of division and vengeance, and it would turn our free and inclusive society into a place of repression, domination, and exclusion.”

“They want to silence us, but we will not be silenced,” Trump added.

The president called on the people of America to stand up to cancel culture to defend American values.

“My fellow Americans, it is time to speak up loudly and strongly and powerfully and defend the integrity of our country,” he told the crowd. “It is time for our politicians to summon the bravery and determination of our American ancestors.”

“In the face of lies meant to divide us, demoralize us, and diminish us, we will show that the story of America unites us, inspires us, includes us all, and makes everyone free.”

Trump reasserted values he championed previously in earlier speeches—Judeo-Christian principles upon which American values were founded, border security, religious freedom, rights for the unborn child—but this time with an added reference to cancel culture.

“We want free and open debate, not speech codes and cancel culture. We embrace tolerance not prejudice. We support the courageous men and women of law enforcement,” Trump said. “We will never abolish our police or our great Second Amendment which gives us the right to keep and bear arms.”

“We believe that our children should be taught to love their country, honor their history, and respect our great American flag,” the president said, to loud cheers and applause.

“We stand tall, we stand proud, and we only kneel to almighty God,” he added. “This is who we are, this is what we believe, and these are the values that will guide us as we strive to build an even better and greater future.”

The president is expected to attend another Fourth of July celebration on Saturday in Washington, where attendees will witness an extensive U.S. military air show set to begin at 6:30 p.m. Four other cities will also have mini versions of the air power display on the same day.