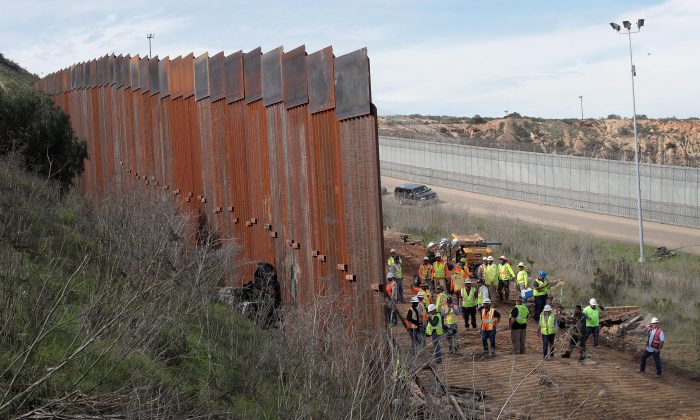 A section of border wall is constructed on the U.S. side of the border in Tijuana, Mexico, on Jan. 28, 2019. (Scott Olson/Getty Images)
Politics

Trump Can Use $3.6 Billion in Military Funds for Border Wall, Court Rules

An appeals court panel said President Donald Trump can use $3.6 billion in military funds for the southern border wall.

The Jan. 8 ruling came less than a month after U.S. District Judge David Briones, who was appointed by President Bill Clinton, issued a permanent nationwide injunction against using the funds.

The Fifth Circuit Court of Appeals granted a stay of the Texas judge’s injunction as the case continues.

The judges who granted the Trump administration’s request noted that the Supreme Court recently blocked a similar injunction. The panel also said there was a “substantial likelihood” that the parties challenging the transfer, the county of El Paso, Texas, and the Border Network for Human Rights, didn’t have standing to sue the Trump administration.

“The Supreme Court recently stayed a similar injunction from our sister circuit,” the judges wrote (pdf). “The Government is entitled to the same relief here for, among other reasons, the substantial likelihood that Appellees lack Article III standing.”

Higginson, meanwhile, wrote in his dissent: “I am unable to agree, without focused panel deliberation and discussion—possibly aided by dialogue with counsel—that the government presently has shown either a likelihood of success on the merits or irreparable harm in the absence of a stay.” He called to expedite merits assessment by the court, noting that rulings surrounding the border wall involve “weighty issues.”

“Breaking News: The Fifth Circuit Court of Appeals just reversed a lower court decision & gave us the go ahead to build one of the largest sections of the desperately needed Southern Border Wall, Four Billion Dollars. Entire Wall is under construction or getting ready to start!” he said early on Jan. 9 on Twitter.

Breaking News: The Fifth Circuit Court of Appeals just reversed a lower court decision & gave us the go ahead to build one of the largest sections of the desperately needed Southern Border Wall, Four Billion Dollars. Entire Wall is under construction or getting ready to start!

“The United States Court of Appeals for the Fifth Circuit has lifted an illegitimate nationwide injunction entered by a lower court, and in doing so has allowed vital border wall construction to move forward using military construction funds,” White House press secretary Stephanie Grisham added in a statement.

“This is a victory for the rule of law. We are committed to keeping our borders secure, and we will finish the wall.”

Trump declared a national emergency along the southern border in February 2019. Secretary of Defense Mark Esper authorized moving the $3.6 billion in military funds to construction projects along the border in September 2019. Customs and Border Patrol said the money will be used to build up to 175 miles of border wall.

Kristy Parker, counsel for Protect Democracy, a nonprofit that represented the plaintiffs in the case against using the funds for the wall, said in a statement that “a court has already determined that the government can’t lawfully use military construction funds to build Trump’s border wall.”

“It’s unfortunate that the people of El Paso will continue to suffer harm while the government appeals, but we’re confident that we’ll prevail again in this next stage of litigation.”