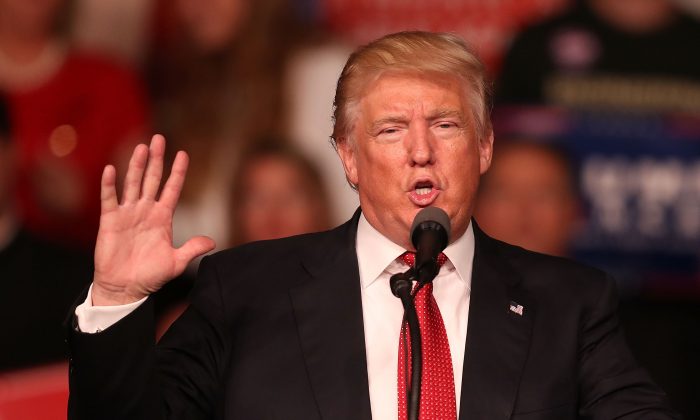 Republican presidential candidate Donald Trump during a campaign rally at the Germain Arena on September 19, 2016 in Estero, Florida. Trump is locked in a tight race against Democratic candidate Hillary Clinton in Florida as the November 8th election nears. (Joe Raedle/Getty Images)
2016 race

“In typical Washington Post fashion, they’ve gotten their facts wrong,” Trump’s campaign spokesman Jason Miller said in a statement. “The Trump Foundation has no paid board, no management fees, no rent or overhead, and no family members on its payroll.”

Trump campaign “responds” to @Fahrenthold story by attacking him. pic.twitter.com/LGpxm9oP9A

The campaign also criticized the Clinton Foundation, which has been the subject of scrutiny after emails released in August show high profile donors requesting access to Hillary Clinton while she served as secretary of state.

“It is the Clinton Foundation that is set up to make sure the Clintons personally enrich themselves by selling access and trading political favors,” the statement said.

The Trump campaign continued to attack “biased” Washington Post writer David A. Fahrenthold, saying that the article was “peppered with inaccuracies and omissions” and said that the reporter was “clearly intent on distracting attention away from the corrupt Clinton Foundation.”

“I would point out that in the second paragraph of that story that you mention, Erin, it says ‘may have’ and later on in the story it says ‘the IRS may want to look into it,’ but of course they haven’t,” Conway said.

That specific part in the Washington Post article reads:

“Those cases, which together used $258,000 from Trump’s charity, were among four newly documented expenditures in which Trump may have violated laws against “self-dealing”—which prohibit nonprofit leaders from using charity money to benefit themselves or their businesses.”

Conway continued, saying that the funds were accidentally directed to the Trump foundation but were later sent to the correct foundation.

“I’ve been talking to the people who are responsible for the Trump Foundation today, trying to get some facts and some figures,” and that monies “were misdirected to his foundation; I’m told by his accountants and attorneys, they went to the right foundation after that.”

“Well, I think what we found is that there is a number of factual errors in that story as there were in previous stories about the Trump Foundation,” Pence said to MSNBC’s Brian Williams, adding that the “larger issue” is the Clinton Foundation.

Trump and Clinton are days away from and preparing for their first debate on Monday, Sept. 26, and recent polls have shown a tight race on a national and state-by-state level.

Questions about money handling and trustworthiness are sure to come up in the debate and each side is preparing and testing its different attacks and counter-attacks which can play out on the debate stage.