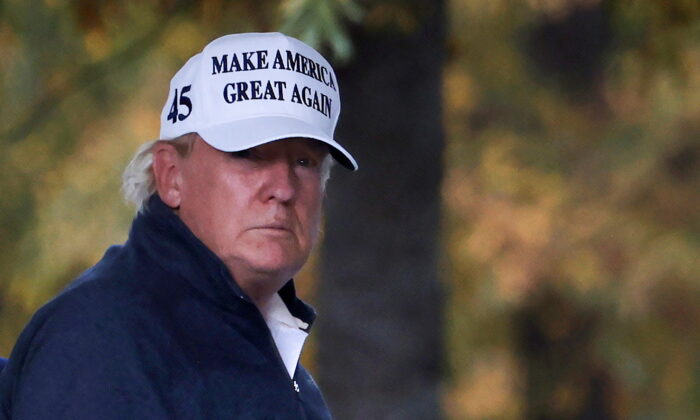 President Donald Trump returns to the White House after playing a round of golf, in Washington on Nov. 7, 2020. (Carlos Barria/Reuters)
Wisconsin

Biden has more than a 20,000-vote lead over Trump in Wisconsin, according to The Associated Press and Decision Desk, an organization used by The Epoch Times. Biden has 49.5 percent of the vote, while Trump has 48.9 percent. A trailing candidate is allowed to seek a recount under state law if the margin of a race is within 1 percentage point.

Justin Clark, Trump’s deputy campaign manager, said on Nov. 7 his team would initiate a recount because of “irregularities” in the Nov. 3 election process, while asserting the team is “very concerned about what we’re hearing and seeing.” He didn’t elaborate.

Canvassing isn’t a recount, but is the process where states can certify unofficial results—typically reported on by news outlets—and make the results official.

Wisconsin Assembly Speaker Robin Vos said an investigation was ordered into how the state’s election was administered.

“With concerns surfacing about mail-in ballot dumps and voter fraud, Wisconsin citizens deserve to know their vote counted. There should be no question as to whether the vote was fair and legitimate, and there must be absolute certainty that the impending recount finds any and all irregularities,” Vos said in a statement, according to WISN.

“Wisconsin’s election system is one of the best in the country. We have well-trained staff that finished counting the ballots well before most other states. However, we can always look for ways to improve it even more.

Trump hasn’t conceded in the election and has promised to fight using legal means. His team filed several lawsuits in battleground states such as Georgia, Pennsylvania, Michigan, Nevada, and others.

Biden, meanwhile, declared victory in the race for the White House on Nov. 7 and said he would attempt to unify Americans after a bitterly fought election.