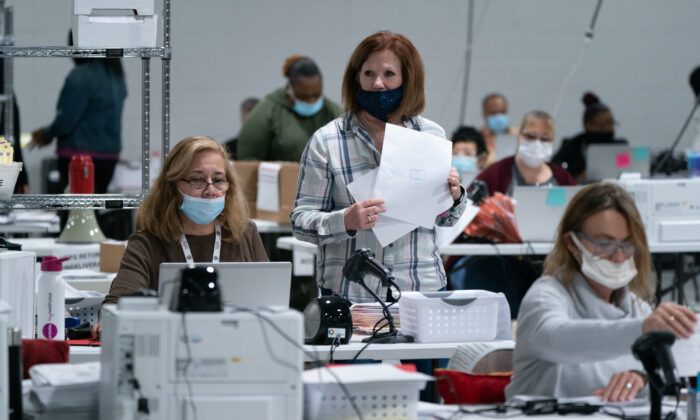 The hand recount of votes cast in the Georgia presidential election will be just the first step of many to verify that all and only legal votes have been counted, the Trump campaign told reporters on Nov. 11.

At the end of the process, the campaign expects President Donald Trump will win reelection.

“This will be a gradual process. This will require patience,” Tim Murtaugh, communications director for the Trump campaign, said during a media conference call. “We know that [the] president[‘s] supporters and the media want immediate results and a neat conclusion by the close of business or at least as quickly as possible. Something to tweet about and move on.

“This is not that. This will require patience and a following of methodical steps and a process. And that’s what will be beginning soon in Georgia.”

The recount effort is headed by Rep. Doug Collins (R-Ga.).

“Every illegal vote suppresses a legal vote, and we don’t want to see that happen,” Collins said during the call.

He said if the Biden campaign is concerned with transparency, it should join the effort and noted that the opposing campaign will be represented in the recount.

In addition to the recount, the campaign is also pursuing inquiries into allegations that some people were denied their right to vote, that ballots were illegally harvested, and that signatures on mail-in ballot packages were not properly matched with the signatures election authorities have on record.

Under Georgia law, Raffensperger has to certify the election by Nov. 20. The campaign expects the recount will be “intense” but will be concluded by that time, Stefan Passantino, counsel to the Trump 2020 campaign, said during the call.

The Trump campaign is challenging in court the elections in Michigan, Pennsylvania, and Arizona, where Biden holds a tight lead. Wisconsin, where Biden also leads, is headed for a recount. If three or four of these states ultimately declare Trump or Biden the winner, they’d have enough electoral votes to take the presidency.

Murtaugh said the process in Georgia and nationally aims at keeping Trump in the White House.

“Every time we take a step along this process, we believe we are getting closer to our goal, and that is the president winning these states and ultimately being reelected,” he said.

“Today’s announcement celebrating the hand recount in Georgia is another step along that path when we are able to do signature matching in Georgia, and being able to investigate whether votes were illegally harvested. And that will be another step. When we file a lawsuit in Michigan, that’s another step. In Pennsylvania, it’s another step.”

While the “methodical” process “may be somewhat lengthy,” there is enough time to get through it, he said.

“If everyone is looking for one single action that will be the silver bullet that overturns the entire election, it’s going to be a process,” he said. “And people are going to have to just be patient and know that everything is a step along the way toward the ultimate goal of the president being reelected.”

Collins pointed out that before the election, Democrats were preparing the public to expect that election results might take weeks to be definitive.

“We’re doing what we need to do under the law. We’re doing it within the law.”