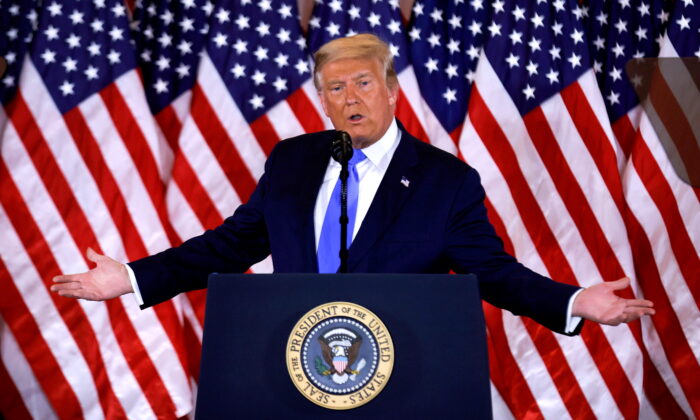 President Donald Trump speaks about early results from the 2020 presidential election in the East Room of the White House, on Nov. 4, 2020. (Carlos Barria/Reuters)
2020 Election

President Donald Trump’s reelection campaign said they are filing a lawsuit in Nevada, alleging there were more than 10,000 ballots that were cast in the state by voters who don’t live there.

The campaign, in a Thursday news conference, comes as Democratic presidential challenger Joe Biden has an approximately 8,000-vote lead over the president in Nevada. The state, which has 6 Electoral College votes, could be key to the outcome of the presidential race.

Trump campaign Nevada chairman Adam Laxalt said there were “examples of ballots mailed across this valley … in trash cans… people getting as many as 18 ballots” in the mail, saying that it is evidence of voter irregularity.

“We still have not been able to observe these signatures or meaningfully examine mail-in ballots out of hundreds of thousands of ballots cast,” Laxalt, the former Nevada attorney general, said in the news conference. He added there were “dead voters that have been counted.”

Meanwhile, he claimed, “thousands of people who have been counted … have moved out of Clark County during the pandemic.” Clark County includes Las Vegas, the state’s largest city.

As a result, he said Trump’s team is seeking emergency relief and is asking to “stop the counting of all these votes.”

Clark County hasn’t responded to a request for comment.

Ric Grenell, Trump’s former acting director of national intelligence, told the conference: “If you haven’t been in the state for 30 days it is illegal to vote … we are filing this lawsuit to protect legal voters.”

Grenell, the former U.S. ambassador to Germany, added that questions to Clark County have not been answered.

The Nevada Republican Party on Wednesday also said that it has received “thousands of complaints” by voters with issues during the Election. Clark County Registrar of Voters Joe Gloria told FOX4 that he hasn’t received any complaints from the GOP.

“Other than issues in the polling place regarding some of their observers,” said Gloria, “we addressed them where we could. But no I haven’t had anything provided to me.”

The Associated Press and other news outlets have not declared a winner in the state.

Nevada elections officials said earlier this week that its vote count would be updated on Thursday.

“Ballots outstanding is difficult to estimate in Nevada because every voter was sent a mail ballot. Obviously, not all will vote,” the Nevada State Department’s Elections Division said. It said mail ballots that were received on Election Day or any ballots arriving via mail over the coming week, as well as provisional ballots, have not been counted.

Wayne Thorley, Nevada’s deputy Secretary of State for elections, told the Las Vegas Review-Journal this week Nevada has “tens of thousands” of mail-in ballots to count. Thorley, however, said that the number reported on Thursday won’t be the final vote tally.

On Thursday morning, a Pennsylvania appellate court ruled in favor of allowing Republican observers to watch ballot counts, but that they do so from at least six feet away.