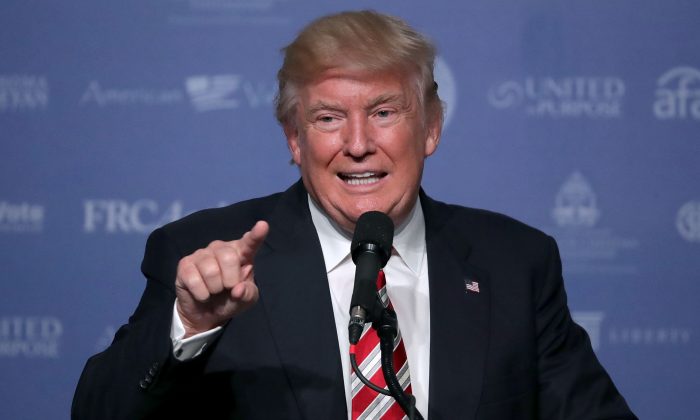 Seizing on a comment made by Hillary Clinton that half of Donald Trump’s supporters fit into a “basket of deplorables,” the Trump campaign released a new ad targeting the democrat’s comments.

“You cannot run for president if you have such contempt in your heart for the American voter,” Trump told the National Guards Association of the United States on Monday in Baltimore, Maryland. “You cannot lead this nation if you have such a low opinion of its people.”

“These were the people Hillary Clinton so viciously demonized,” said Trump, who demanded that Clinton issue a full apology. “She divides people into baskets as though they were objects, not human beings.”

Trump’s campaign used the comments as the theme for a television ad that accused her of attacking “people like you, you, and you.” The ad was sent out to four battleground states that show tight races between Clinton and Trump—Ohio, Pennsylvania, Florida and North Carolina.

At a New York fundraiser on Friday night Clinton told the audience that: “To just be grossly generalistic, you could put half of Trump’s supporters into what I call the basket of deplorables. Right? The racist, sexist, homophobic, xenophobic, Islamaphobic—you name it,” she said, before stressing that other Trump supporters are frustrated and need sympathy.

Her campaign released a statement the next day in which Clinton said she regretted referring to ‘half’ of Trump’s supporters, but that she stood by her comments.

“I won’t stop calling out bigotry and racist rhetoric in this campaign.” —Hillary pic.twitter.com/C3Z7GybJ53

Trump and his aides have compared Clinton’s statement to a gaffe made by Mitt Romney four years ago when he suggested that “47 percent” of voters wouldn’t back him because they were dependent on government.

The Trump campaign also retweeted a tweet by Obama from 2012 in responds to Romney’s comments.

RT if you agree: We need a President who is fighting for all Americans, not one who writes off nearly half the country.

Trump described Clinton’s comment as the “biggest mistake” of the year.

“When I saw this in its full form and I saw the anger with which she said it,” Trump told the Fox News Channel. “I think it’s the single biggest mistake of the political season.”